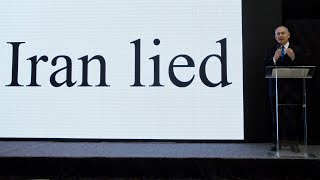 Israeli Prime Minister Benjamin Netanyahu understands the power of framing a story. On April 29, he gave a televised presentation and revealed, in dramatic fashion, the existence of an alleged archive of documents, drawings and photographs that proved Iran once had a program dedicated to the acquisition of a nuclear weapon, contrary to public claims that senior Iranian officials made in the past.

The relevance of Netanyahu's message is up for debate. Most observers acknowledge the expose' may prove embarrassing to the International Atomic Energy Agency (IAEA) and Iran, which together certified in December 2015 that all issues pertaining to the so-called "possible military dimensions" of the Iranian nuclear program had been resolved. But there is unanimous agreement that nothing in Netanyahu's presentation shows Iran is operating in violation of its commitments under the agreement reached with the permanent members of the United Nations Security Council, Germany and the European Union regarding its ongoing nuclear activities (formally known as the Joint Comprehensive Program of Action, or JCPOA.)

While Netanyahu hailed the work of the Israeli intelligence service (Mossad) in acquiring the Iranian archive, the narrative Israel has promulgated about this archive and how it came into its possession is less than convincing. Upon closer scrutiny, what emerges is less about the covert collection of secret information and more about manipulating opinion. Netanyahu's presentation could have been an episode of a Donald Trump reality television show, since the Israeli prime minister was performing for an audience of one -- the American president.

On May 12, Trump will announce his decision on whether the United States will remain a party to the JCPOA. Was Netanyahu's revelation a legitimate function of a sovereign state that, armed with alarming new information pertaining to international peace and security, opted to publicly expose this threat? Or were the motives more nefarious, with the Israeli prime minister intending to manufacture a case for which there was no substantive supporting documentation in order to manipulate the policies of another country?

Upon closer examination of the issue, the answer becomes clear: Netanyahu was conducting a classic information operation against the American president and, by extension, the American people.

The mission of any intelligence-driven psychological warfare/information operations effort is to manipulate public opinion to support controversial foreign policy and/or national security policies and decisions. Intelligence is either cherry-picked or manufactured and then selectively released to the public at a time most beneficial to the policy objective being supported.

I have considerable personal experience in this sort of operation. From 1994 through 1998, while serving as a weapons inspector with the United Nations Special Commission on Iraq, I had a front-row seat to the inner workings of the Israeli intelligence service when it came to the conduct of the full spectrum of intelligence operations against Iraq. During this time, I witnessed the good, the bad and the ugly of how Israel collects and analyzes intelligence information. I sat in on discussions with the head of Aman (the Israeli military intelligence service) as options regarding the proper utilization of this intelligence were discussed.

I can attest that as long as Israel viewed the work of U.N. inspectors as being useful in furthering its national security objectives -- namely, when the U.N. was seen as a viable instrument of eliminating Iraqi weapons of mass destruction -- its intelligence services engaged in classic intelligence work. They gathered information about Iraq using a wide range of intelligence collection capabilities and conducted analysis designed to produce intelligence assessments geared toward discovering the truth about Iraq's proscribed capabilities. This information, and Israel's role in producing it, was shrouded in secrecy, as is normally the case when a nation does legitimate intelligence work.

In the fall of 1997, the intelligence war between the U.N. inspectors and Iraq shifted away from the search for hidden weapons of mass destruction capabilities inside Iraq and moved to the corridors of the United Nations itself, where a public relations war was being waged between the supporters of the weapons inspection process and the supporters of Iraq.

Until this time, the U.N. weapons inspectors had operated in the shadows, the details of their work hidden from public scrutiny. However, once the Iraqis and their allies turned the tables on this shroud of secrecy, accusing the inspectors of being little more than a front for intelligence services hostile to Iraq (rightly so, it turned out), the mission of the inspectors shifted away from searching for the truth on the ground in Iraq to shaping public opinion around the world about the nature of their work.

The CIA worked hand in glove with the U.N. inspectors and CNN to produce a program dedicated to Iraqi concealment and deception, while the British MI6, through a project known as "Operation Mass Appeal," used intelligence information in the possession of the inspectors but deemed to be of insufficient quality to support an inspection, to seed stories to compliant journalists around the world for the purpose of shaping public opinion. This was classic information operations/psychological warfare, and I played a central role in its conduct.

At first, Israel stood on the sidelines, working with U.N. inspectors to finish the job on the ground inside Iraq. But as the U.N. disarmament effort in Iraq became more about the political and economic isolation of the regime of Saddam Hussein (in preparation for eventual regime change in Baghdad) and less about bringing closure to the disarmament of Iraq's WMD capability, Israel saw the light. Realizing the Security Council was no longer going to permit U.N. weapons inspectors to carry out aggressive inspections inside Iraq, Israel pulled its support from the inspection process, and aligned itself with those in the business of preparing public opinion for a war with Iraq. This required Israel to do a 180-degree turnaround regarding its intelligence-driven assessment of Iraqi WMD capabilities.

In the spring of 1998, when I met with Amos Gilad, the new head of Aman's research division (responsible for the production of Israel's national intelligence estimates), he indicated that, thanks to the work of U.N. inspectors, Israel assessed that Iraq's WMD programs had been eliminated. Four years later, on the eve of the American-led invasion of Iraq, Gilad changed his mind, claiming that Iraq had both chemical and biological weapons, long-range missiles to deliver them and a nuclear weapons program in the first stages of development.

This wasn't Gilad's first experience with manipulating intelligence for political objectives. During the time of the Camp David accords in 2000, Gilad led a campaign to undermine the credibility of PLO leader Yasser Arafat by painting him as a proponent of Palestinian unrest designed to harm Israel. The intelligence information Israel gathered showed the exact opposite to be the case. Gilad, however, was operating not in support of the truth, but rather the political ambition of then-Prime Minister Ehud Barak, whose campaign slogan at the time was, "There is no partner for peace." Gilad, later investigations showed, had doctored the intelligence in order to paint a false and misleading picture of on-the-ground truth.

Related Topic(s): American Facism; Benjamin Netanyahu; Information Warfare; Intelligence; Iran; Iraq; Israel, Add Tags
Add to My Group(s)
Go To Commenting
The views expressed herein are the sole responsibility of the author and do not necessarily reflect those of this website or its editors.