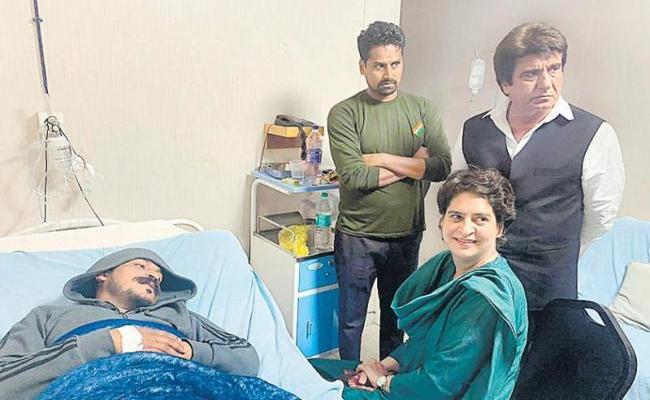 Priyanka Gandhi-Vadra has just suffered the humiliation of her life with Bhim Army, a pro-Dalit party, declaring that it would have nothing to do with Congress party in the forthcoming Lok Sabha elections.

Priyanka had last week made a beeline to Bhim Army chief Chandrashekhar Azad Ravan (why Lutyens Media doesn't mention "Ravan" is anybody's guess) in a hospital in Meerut where the latter had checked in after he was booked by the UP Police for violation of Model Code of Conduct.

Bhim Party's national president, Vinay Ratan Singh, has now spoken about that meeting, which was nothing more than a photo-op.

"She wanted to meet Chandrashekhar bhai but he said no. She then made a special request and they met for a few minutes. No political issue figured in their talks."

Phew! Priyanka begging for a meeting with Azad for all this, without a word on politics: A snub by the Bhim Army in public and disdainful refusal of any alliance in 2019 General Polls.

The words of Singh would be an acid in Priyanka's ears: "The Congress fought B.R. Ambedkar. The party ruled the country for so long, but did nothing for us. Atrocities were inflicted on Dalits under its rule," said Singh. "There's no single reason for us to support it."

It's a mystery why after the first refusal, Priyanka Gandhi-Vadra still begged for a meeting with Azad. She ought to have known the disinterest of Bhim Army in her and her party. Then why risk a humiliation?

Apparently, meeting Azad was an attempt to convey the signal to Bahujan Samaj Party (BSP) and its supremo Mayawati that Congress could cut into its Dalit base by siding with Bhim Army. As is known, BSP has dropped Congress like a hot potato in Uttar Pradesh and like a rejected lover, Congress sought its own revenge by putting Priyanka in the same frame as Chandrashekhar Azad Ravan.

As we know by now, Lutyens Media promptly flashed the photo on its front pages. A beaming Priyanka peering into the camera with Azad neither looking into the camera nor even removing hood from his face. (Lutyens Media is a joke on Priyanka: It mentions a seven-minute speech by her as "aggressive" and has also begun to term her as "ganga ki beti".)

Priyanka Gandhi apparently is proving a disaster as Congress general secretary in-charge for east Uttar Pradesh. Why put her in election heat in the first place? As Akhilesh Mishra, CEO of Bluekraft Digital Foundation, writes in Indian Express today: "Priyanka Gandhi is an insurance policy that in case the rebellion against Rahul Gandhi becomes too hot to handle post-defeat (2019 polls), then instead of the leadership going to a non-family person, she would be there to step in."

Related Topic(s): Army; Dalits; Election; Gandhi; Media, Add Tags
Add to My Group(s)
Go To Commenting
The views expressed herein are the sole responsibility of the author and do not necessarily reflect those of this website or its editors.