Reprinted from popularresistance.org By Kevin Zeese and Margaret Flowers

Fifty-two years ago on April 4, 1967, at Riverside Church, Rev. Martin Luther King, Jr., gave his most important speech ever, "Beyond Vietnam: A Time to Break Silence." King's conscience drove him to take the unpopular position of publicly criticizing the Vietnam War and putting it in the context of the "giant triplets of racism, materialism, and militarism." The message of that speech remains relevant today because its wisdom has not been heeded.

We put this in the context of the North Atlantic Treaty Organization (NATO) because this year on April 4, the anniversary of that speech and the anniversary of the murder of King by the government, NATO will be holding its 70th anniversary meeting in Washington, DC. Protests and other activities are being planned.

NATO is a front for Western military aggression, which has resulted in destruction around the world, mass deaths and mass migration as people are forced from their NATO-destroyed communities. It's time to end it. 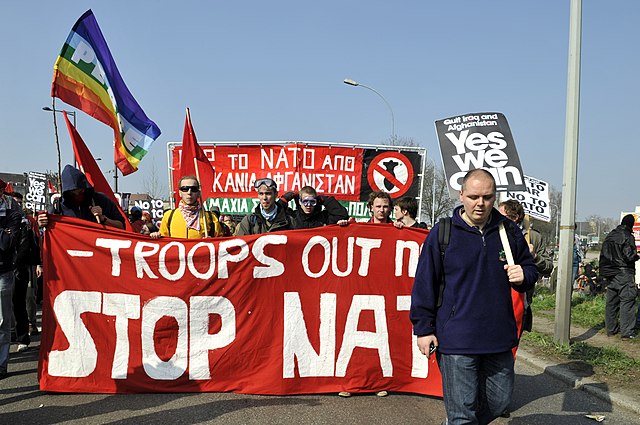 That is the question asked by the Black Alliance for Peace on this birthday weekend of Martin Luther King, Jr. The Alliance explains why Dr. King would speak out against NATO if he were alive today:

Dr. King would be opposed to the North Atlantic Treaty Organization (NATO) because it is an instrument of US and European militarism. He would not be confused-and neither are we-about why the liberal establishment, neocons, military-industrial complex, corporations and the corporate media are opposed to ending an anachronistic structure. NATO's only reason for being today is to serve as the military wing of the dying U.S.-European colonial project.

Black Alliance for Peace is not alone in seeing the reality of NATO as an aggressive arm of the US military. In the Chicago Tribune, Victor Davis Hanson writes, "In an era when the Soviet Union and the Warsaw Pact are now ancient history, everyone praises NATO as 'indispensable' and 'essential' to Western solidarity and European security. But few feel any need to explain how and why that could still be so."

The truth is NATO is not only not indispensable or essential - it is counterproductive. It creates conflicts and is being used as an aggressive military tool. Among the wars of NATO are Afghanistan, Libya, Syria, Somalia, and Yemen as well as Bosnia, Serbia, Kosovo and Yugoslavia

In NATO is a Danger, Not a Guarantor of Peace, the American Conservative describes how NATO was appropriate when it was created to deter Russian aggression, but that was only necessary prior to the dissolution of the soviet union. It writes that NATO "has maintained a destabilizing posture toward Russia ever since" and urges Trump to return to his campaign view that NATO is obsolete, a position he has backtracked from saying he just didn't know much about it.

David Swanson of World Beyond War describes how NATO works against the rule of law writing, "NATO is used within the US and by other NATO members as cover to wage wars under the pretense that they are somehow more legal or acceptable."

Instead of ending NATO after it no longer served any defensive military purpose, NATO expanded to 29 nations, 13 since the end of the Soviet Union, including countries on the border of Russia. One of the reasons for the US coup in Ukraine was to antagonize Russia and prevent access to its naval fleet through Crimea. Ukraine is now partnering with NATO.

The current US national military strategy calls for conflict with Russia and China. NATO continuously expanding, conducting military exercises and putting bases, missiles and other military equipment on the Russian border are part of that strategy. NATO has even expanded to Colombia, which borders Venezuela, another nation the US has threatened with war while conducting an economic war and regime change operations there.

Kevin Zeese is co-chair of Come Home America, www.ComeHomeAmerica.US which seeks to end U.S. militarism and empire. He is also co-director of Its Our Economy, www.ItsOurEconomy.US which seeks to democratize the economy and give people greater (more...)
Related Topic(s): Beyond Vietnam Breaking The Silence; Martin Luther King; NATO, Add Tags
Add to My Group(s)
Go To Commenting
The views expressed herein are the sole responsibility of the author and do not necessarily reflect those of this website or its editors.