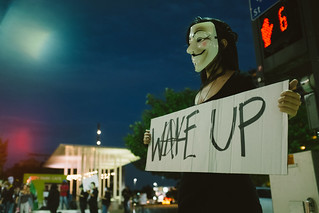 Those of us on the left know that what Sanders calls a "revolution" is only the first step in the transformation necessary to produce a just society. Some of us labor under the delusion that if we are patient, some day Americans will rise up and overthrow the system that oppresses us. Even more unreasonably, some think this can somehow be done without dirtying our hands in electoral politics. Others argue that it can only be done by building a third party to challenge the corporate Duopoly. While creating an alternative to the Duopoly will play a role in the ultimate transformation of American politics, it will take many years to realize. We simply do not have the luxury of time. The reality is that global climate change sets an upper limit on how long we have to act. Until we begin electing candidates who will stand up to the Wall Street-dominated fossil fuels industry, we are living with a sword hanging over our heads. When "liberal" Americans seem prepared to select the darling of Wall Street to represent them in the presidential election, there is too much groundwork to be done to create a viable third party before it is too late.

Clinton's success despite her high unfavorability ratings shows how far we have to go to educate the public about the need for revolution and what that will entail. We must begin with the system as it is, meet the people where they are at, and hope that by speaking to them in their language, we can lead them to question the assumptions that keep them captive of a system designed to favor the interests of the powerful. That means elections matter, even if one victory does not in itself constitute a "revolution." They provide platforms from which to educate and organize those who have not given up altogether on rescuing the US and the world from the dire circumstances we have allowed it to fall into. Sanders has shown how this can be done without depending on the very interests who control the system to get this opportunity.

The question remains as to whether the Sanders candidacy will advance the cause of a real revolution, or impede it. If his supporters simply cave in and support Clinton, they will show that they are unwilling to challenge the practice of fear-based "strategic" voting promoted by the Democratic leadership. The grip on power of the party elite depends on successfully convincing us that voting for corporate Democrats is the only alternative to Republican rule. It is not. If their jobs depended on it, these power brokers would have to give us candidates who actually represent the People's will. If the majority of Democrats continue to accept the lesser of two evils logic, they have no reason to expect that the party's steady drift to the right will ever end. If they refuse to vote for the anointed candidate of the limousine liberals, we have a chance to force change.

A lot of people have been saying since the beginning of the Democratic primary campaign that Sanders would end up doing more harm than good to the cause of fundamentally changing the system of American politics. Assuming that he would lose in the end, they pointed out that his ultimate endorsement of Clinton would serve simply to shore up a party that can no longer generate excitement among even its most faithful members because its chosen candidates are unwilling to challenge the moneyed interests that he is targeting. The naysayer's argument was that, like past insurgent candidates for the Democratic nomination, he would serve as a sheepherder for the Duopoly party claiming to represent "the People" by encouraging his disappointed supporters to rally round the choice of the Establishment. While this is a distinct possibility, those committed to a real revolution need to understand that we cannot succeed without learning to recognize and capitalize on every opportunity.

Whether or not Sanders wins the nomination, his amazing run presents such an opening, one we may not get again. While he can help advance the cause beyond the convention, let's remember that he has told us endlessly that the outcome of the struggle is in our hands. We have to be prepared to respond to the very real possibility that Sanders himself will abdicate leadership in the movement he has begun, even while encouraging him to stay the course. We have to help him fight for every vote to continue getting his message out during the campaign and at the convention. We must also encourage him to set his sights higher than simply making the case for progressive policies before a convention run by politicians whose primary interest is maintaining power and who believe that can only be done by kowtowing to the corporate elite. Words must be followed by action.

Ralph Nader recently argued that if Sanders were to lose at convention, he could still keep his word to endorse Clinton, while challenging her corporate vision. There is nothing to stop him from continuing his assault on neoliberalism and corruption that is the root cause of America's malaise. While justifying his ongoing efforts as a way to rally his troops to defeat Trump, he can continue to barnstorm in favor of the Democrats. The key is that rather than promoting the failed policies of Clintonism, he can argue for those Democratic values that people want to believe the party represents. This will prepare us for continuing to fight for them if Clinton is elected, rather than abandoning the fight as Obama supporters did after 2008, with predictable results.

A true political revolution must be based on addressing the corruption upon which the current system is built. Sanders has gotten the ball rolling, focusing our attention on the fact that the entire progressive movement depends on dealing with this problem. With our encouragement, he can keep the movement going forward. Even without his cooperation, we can proceed on our own. He has provided us a glimpse of our collective power. We have to use it, organizing around the issue of corruption and highlighting how the consequences play out in a Clinton presidency, as they no doubt will if her policies are consistent with her atrocious record of neoliberalism, neoconservatism and generally favoring the interests of Wall Street over Main Street.

If we can get average Americans to set their sights that high, they might be able to glimpse the more fundamental changes that will be required to reshape the US economy and society into something that will enable future generations to not only survive, but thrive.

This article was originally published on the website of Soldiers For Peace International. It may be reproduced, unedited and with attribution, 48 hours after it appears here.

Related Topic(s): Corruption; Duopoly; Nader; Nomination; Revolution; Transformation, Add Tags
Add to My Group(s)
Go To Commenting
The views expressed herein are the sole responsibility of the author and do not necessarily reflect those of this website or its editors.