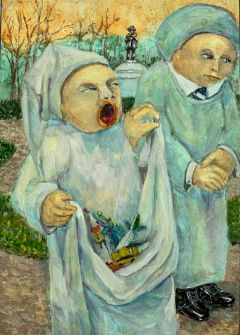 Scream if We Must, But VOTE
(Image by Akemi Ohira)   Details   DMCA

Notwithstanding, Vengeance is Mine Sayeth the Lord

In defiance of the distraught, devastated and disenfranchised

Unlike our 45th's playing it down approach to American healthcare and resulting cost in both human life and livelihood - especially to heroic frontline First Responders in hospitals, small businesses and family home schooling - Donald Trump proves, with current Supreme Court nomination, he can move decisively, even expeditiously, when it's in his own best interests and doesn't include, shaking hands with disgusting people.

Put simply, Donald Trump's Administration and family enterprises, are the natural, unmistakable and self-fulfilling, End Times scenario, dangling us at the end of the hangman's rope of succession. From slavery's caste system, to neo-Nazi Dulles Brothers foreshadowing, Too Big to Fail, Corporatism's forever oil wars' manipulating the Herd Mentality gnawing still on the belief that the color of one's skin determines one's entitlements, and pecker order.

Sadly, it only takes a few moneyed pawn makers to bring down a Democratic Republic, unless we"

Now is the time to resurrect, Ask what you can do for your country, by rejuvenating our respect and reverence for each other, perhaps especially our teachers, medical personnel, scientists and farmers.

Remember not all teachers are found in classrooms, confined within Covid-19 infested school buildings, and the farmers we seek, are not found on the factory farms of Corporatism, but family farms and farmers who have always known, as goes the soil, goes diet, nutrition, humanity and by extension: all life on earth.

Since President Roosevelt's 1945 death freed the greed of household corporate names to launch their takeover of America, We the People have been sliding into the role of mindless, aimless spoon-fed misinformation, and now social media addiction. So, snap out of it!

Yes, some Trump voters thrive on reviving Jim Crow, second class citizenship for women and servitude for all non-white people. However, the far more dangerous Trump enablers, care less about who votes for or against Trump, than they do for controlling their investment in a presidential puppet.

All who desire the survival of our Constitution, the resurrection of, Lincoln's American Dream of a Democratic Republic of all the people, by all the people and for all the people and the rejuvenation of our exceptional experiment in one person, one vote - need to act like it until the very end of our journey, by emulating Justice Ruth Bader Ginsburg, and show up.

Face it, a lot of us long for the simplicity of the unhurried and neighborly lifestyle of our grandparents if only we didn't need to give up gas guzzlers, one-nightstands and our cells to get it, but America's life's breath requires more than hugging the flag.

Beware, for all of the freedom of choice we've let slip away, there is more than enough dirty money to blind Conservatives in denial, to the inevitable loss of planet, because of our lack of stewardship and love thy neighbor as thyself.

If we do not elect Donald Trump from office, America may die in the arms of Corporate rape, still worse, our grandchildren will die from, Climate Change - unless.