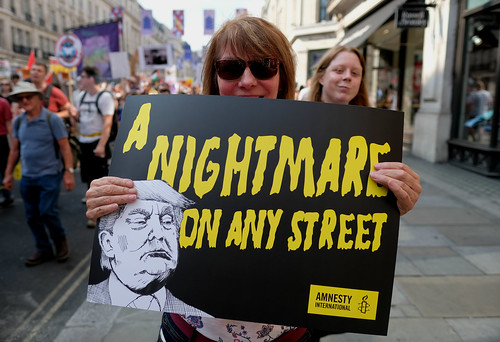 A Nightmare on Any Street!
(Image by alisdare1)   Details   DMCA

The following collage of more and less hysterical reactions to President Trump's embrace of President Putin includes cries of "Treason!" without any call to action. What can we do if this is as true as it seems? The answer, such as it is, follows at the end of this piece.

Today's press conference in Helsinki was one of the most disgraceful performances by an American president in memory. The damage inflicted by President Trump's naivete', egotism, false equivalence, and sympathy for autocrats is difficult to calculate... No prior president has ever abased himself more abjectly before a tyrant. -- US Senator John McCain, Republican of Arizona, official statement, July 16

Donald Trump's press conference performance in Helsinki rises to & exceeds the threshold of "high crimes & misdemeanors." It was nothing short of treasonous. Not only were Trump's comments imbecilic, he is wholly in the pocket of Putin. Republican Patriots: Where are you??? -- John O. Brennan, former director, US Central Intelligence Agency

[Trump] gives every impression of betraying his oath of office... Trump's own national security adviser said the Russian election attack constituted an "act of war." So what does that make his boss? Some -- including former CIA di0044rector John Brennan -- now dare call it treason. That conclusion was once unthinkable. No longer. -- Max Boot, Washington Post columnist

Everyone in this body [US Senate] should be disgusted by what happened in Helsinki today. -- Senator Ben Sasse, Republican of Nebraska

I am a tea party conservative, that will never change. But Trump was a traitor to this country today. That must not be accepted. Speak out. -- July 16 Trump/Putin tweet from Republican former Congressman Joe Walsh, now a syndicated radio host

The Trump team were colluding with the Russians in 2016 -- and they are still colluding. -- Carl Cameron, former chief political correspondent for Fox News

Persistent and disruptive cyber operations will continue against the United States and our European allies, using elections as opportunities to undermine democracy, sow discord and undermine our values... Frankly, the United States is under attack. -- Director of National Intelligence Dan Coats told the Senate Intelligence Committee in February 2018

Some [Republican officials] now reportedly seek to impeach [US Deputy Attorney General] Rosenstein on trumped up charges. To attack one of our national defense leaders as we are being attacked, and to do so to benefit our foreign adversary, is textbook treason. [emphasis in original] -- David Rothkopf, CEO and Editor, Foreign Policy Magazine

This is an incredible, unprecedented moment. America is being betrayed by its own president. America is under attack and its president absolutely refuses to defend it. Simply put, Trump is a traitor and may well be treasonous. -- Charles M. Blow, New York Times columnist

Treason against the United States, shall consist only in levying war against them, or in adhering to their enemies, giving them aid and comfort. No person shall be convicted of treason unless on the testimony of two witnesses to the same overt act, or on confession in open court. -- United States Constitution, Article III, section 3

Since his first moment in office, President Trump has been guilty of impeachable offenses, most obviously by violating the emoluments clause of the Constitution: using the office of the presidency for personal profit for himself, his family, and his friends. At least some of the corruption of the Trump administration has been widely reported and even resulted in a few official resignations. But the impeachable corruption continues uninterrupted.

Now it appears more than likely that, since his first moment in office, President Trump has also been a traitor. And the apparent treason continues uninterrupted.

Among Republicans the response to Trumpian high crimes and misdemeanors has been largely limited to the wringing of hands, backed by mock-pious tut-tutting, and expressions of shock -- shock! -- to see sycophantic Putin-worship practiced so openly. Senator McCain's exceptional response should shame the others, but smart money says it won't. We live in a country where the expression "Republican patriot" is usually an oxymoron.

Vermonter living in Woodstock: elected to five terms (served 20 years) as side judge (sitting in Superior, Family, and Small Claims Courts); public radio producer, "The Panther Program" -- nationally distributed, three albums (at CD Baby), some (more...)
Related Topic(s): Corruption; Donald Trump Versus The Constitution; Guilty; Putin; Republican, Add Tags
Add to My Group(s)
Go To Commenting
The views expressed herein are the sole responsibility of the author and do not necessarily reflect those of this website or its editors.