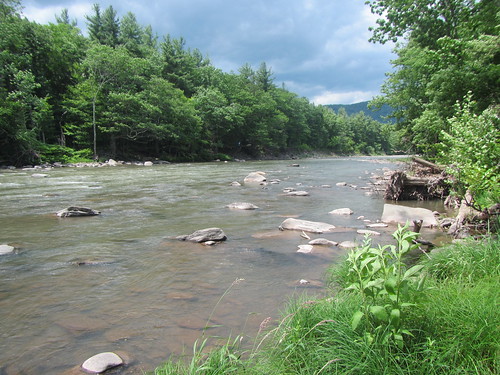 The road led up the hill between houses until it came to the lake where it ran between the lake and the woods and the thought of people disappeared if he was lucky. He was sick of people, especially those he saw in masks because of their obsessive fear of death. They ran in packs. They seemed insane to him, as if germs might fly through the country air and infect them with a virus in a reversal of the way the insects were starting to fly low over the water and the fish would jump to devour them. He preferred the fish and the bugs and was glad no masked bandits were on the road to rob him of the morning's beauty.

There was a young boy fishing, casting and reeling back in a rhythmic way. The boy yelled out as he reeled in his first catch of the season, a glittering rainbow trout that sparkled in the sun.

Once he was twelve years old and started out very early between the edge of night and the dawn of day. Alone, beautifully alone, with the dew thick upon the grass and the fog still clinging to the water in the creek. His family was at the farm. He awoke in the dark while his sisters and his mother slept and his father snored loudly. He tiptoed through the cabin and quietly shut the door behind him, almost catching his hair in the flypaper on the way out. He got his fishing gear from the porch. In an old Maxwell House coffee can were the night crawlers and the other worms he had dug the previous evening under the apple tree by the bull's pen.

Now it was April and the ice on the lake was gone and the two geese he had seen last year had returned to their old nest. Last spring he had watched them very closely for more than a month as the goose sat patiently on her eggs and the gander sailed the waters on alert for predators. Some days he would see them swimming together near the nest. This worried him. He wondered if leaving the eggs unprotected for even a short time would give a predator an opening to attack. When the goslings never appeared, he assumed a predator had seized them.

The worms in the can were big and juicy. When he moved the dirt, they gyrated to the surface and tickled his fingers. He felt sorry for them. They seemed so alive and would soon be dead. Maybe he should set them free. The dirt where he dug them behind the old shed between its back wall and the thick wooden slats of the sad bull's pen was dark and wet and redolent of fallen apples. The huge ring-nosed bull had heard the grating of his spade and had come over to the fence. It was dark there in the enclosed space and he got the chills as the bull snorted at him through the empty spaces. A strange vibration passed between them.

The boy showed him the trout as he unhooked it. He grasped it with two hands and gently bent and released it into the shallow water where it hesitated, as if shocked, and then swam away. The boy turned to the man and they gave each other high fives. Something passed between them. They laughed and the man walked on wondering why people liked to kill and capture free creatures.

He thought: Is it possible not to remember to forget but just to live forward in a forgetfulness that is a constantly emerging present?

The road turned sharply there and a man in a mask approached him. On an impulse, he asked the man why he was wearing a mask when he was outside on a gorgeous morning. The man said, "To protect myself from the virus. Why aren't you wearing one?"

"Because I don't think pigs can fly," he said.

The other man gasped and his eyes flared in fear and he rushed away.

He walked on and saw the gander standing on the beach, looking around like a proud sentry. The goose was on her nest. Maybe, he thought, they, at least, had learned something.

Then it was raining lightly. The only sounds were the birds and the rain and he opened his mouth for the rain and his ears for the birds and his heart for the day. He walked down the gravel path up past the barn to the road and crossed the bridge across the creek to get to the side where the fishing was really good because the river twisted and turned over there to create little peninsulas that protected deep pools where the fish lay in wait. It was also where the Hermit of the Esopus was said to live. His name was Billy Bush and he wondered if he was a fictional character. He had never seen him.

Maybe he was asking the wrong question. He felt in a flash that he knew the answer but couldn't say what the true question was. But it didn't seem to matter now. He felt as he walked ahead he was heading back to find his future in the present.

Back in time and the city, his parents had appeared on a television show called, "Do You Trust Your Wife?" The host of the show was Johnny Carson. This was his first gig before he would become famous as the long-running host of "The Tonight Show" and an iconic figure in TV lore. This is true, but he wasn't sure back then whether the hermit was as real as Carson because he saw Carson and they talked but the hermit seemed like a legendary figure. Carson asked him to stand up in the audience and he asked him if he felt weird being the only boy as the middle child with seven sisters. He said, "No." Carson persisted, "I guess you feel like the baloney between the bread." The boy hated baloney and he was silent. A man held up big cue cards that said applause. Carson looked like a giant cardboard cutout. The audience clapped and the show went on as it always does.

Related Topic(s): Beauty; Fear; Fishing; Illusion; Masks; Thinking; Time, Add Tags
Add to My Group(s)
Go To Commenting
The views expressed herein are the sole responsibility of the author and do not necessarily reflect those of this website or its editors.