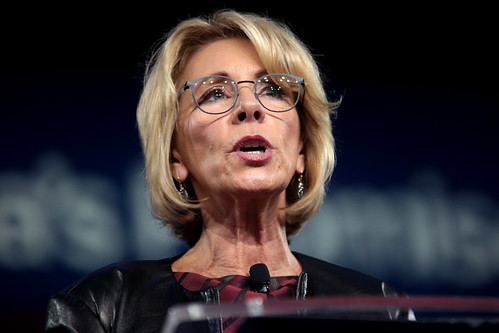 On May 24th, Secretary of Education Betsy deVos was questioned by a House committee. She was asked whether schools that discriminate should be given taxpayer dollars to help them succeed with discriminating.

She said yes. She said that she believes that parents who don't want their children going to school with undesirable, less human children, should be allowed to make that decision, and to have taxpayers pay for it.

One Congressmember asked about Lighthouse "christian" Academy in Bloomington, Indiana. The school receives almost a million dollars a year of tax money. Its website says that it teaches that the book of Genesis and Creationism are absolute truths. So science, like evolution or biology, or physics, are both irrelevant and simply wrong.

They also tell parents that they don't have any programs for students with learning disabilities.

The Lighthouse "christian" Academy is a big, national business. We have several of them around Southern California. All of them teaching both that the Bible is inerrant, and that Jesus was fundamentally wrong on various points. (Logical consistency is not the hobgoblin of "christian" minds.) All of them look forward to Betsy deVos increasing their funding and profits. (Some of them actually claim to be "non-profit businesses.")

What Betsy deVos said in answer to the Congressmember's repeated questions (repeated, because deVos really tried to avoid answering) was that parents should have the right to choose schools that they like, and the government shouldn't interfere with that.

One pastor was named Jerry Falwell, and he went on to make a fortune promising parents two things:

After a decade of litigation, in 1964, the U.S. Supreme Court ruled that using public money to fund segregated schools was unconstitutional. Public schools reopened and black families had a chance to get their children educated. And ever since, minority parents have been trying to get local school systems to actually desegregate schools. And people like Betsy deVos have been fighting to find ways to resegregate schools.

As violent and incomplete as school desegregation was, and remains today, one fundamental result is clear. When students are schooled with students of other races, genders, religions, abilities, etc., they learn that what their parents fear is not real.

Betsy deVos has spent a lifetime trying to "save" white children from integration. Now she has control of vast stores of Federal tax dollars earmarked for education, and she is publicly proclaiming her intention to use it to support modern "segregation academies."

In fairness to deVos, she did not speak of racial segregation during her recent testimony. She focused her attention on her desire to help students avoid contact with classmates who do not fit deVos' definitions of "proper" gender identities. She not only wants to allow schools to deny admission to gay or lesbian or transgender students. The Lighthouse "christian" Academy business model is to exclude even the "straight" siblings of LBGTQ students from enrolling.

Related Topic(s): Betsy Devos; Schools; Segregation; Taxpayers, Add Tags
Add to My Group(s)
Go To Commenting
The views expressed herein are the sole responsibility of the author and do not necessarily reflect those of this website or its editors.