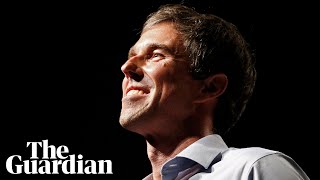 Who is 2020 presidential candidate Beto O'Rourke? The Texas Democrat who narrowly lost to Ted Cruz in the 2018 midterms, has announced he is to run for president in 2020. The former congressman gained a ...
(Image by YouTube, Channel: Guardian News)   Details   DMCA

Eliz Markowitz is running a campaign in Fort Bend to serve in the Texas legislature. If she wins her special election on January 28th, she will move us one seat closer to Democratic control of the state house for the first time since 2001. And because this seat has always been a shoe-in for Republicans, her victory would signal a sea change for Texas leading into the 2020 general election.

I know from experience that grassroots organizing, door-to-door block walking, and direct voter engagement is the best way to get this done. That's how I've won long shot races in the past, it's how I won more votes than any Democrat in Texas history in 2018, and it's how we're going to help Eliz win this race.

And it's why I'm starting a new grassroots organization, Powered by People, to help candidates like Eliz by bringing together volunteers from around the state to work on the most important races in Texas.

Because it's bigger than just one election.

If we win in Fort Bend, it will inspire the confidence, financial support and volunteer turnout to pick up the 8 additional seats we need to control the state house and make progress on gun violence, healthcare, education and climate.

It will give us a shot at picking up as many as 6 additional seats in the U.S. House of Representatives.

It will show the rest of Texas that we can finally replace John Cornyn, Trump's most reliable enabler, in the U.S. Senate.

And it will help energize the broad grassroots support necessary for the Democratic Presidential nominee to win Texas' 38 electoral college votes our best shot at defeating Trump and Trumpism forever.

I will spend this next year focusing on this extraordinary opportunity through Powered by People. I would love for you to join me.

Powered by People will organize grassroots volunteers to do the tough, necessary work that wins elections: registering Texans to vote (especially those that have just moved to Texas and those who are just turning 18), knocking on their doors, making phone calls, and connecting the dots so that we all understand that in order to make progress on the issues we care most about like gun violence, healthcare and climate we will have to register, volunteer and vote.

Together, we will help Eliz win her race, help Democrats win control of the State house, elect more Democrats to Congress and work to defeat Donald Trump in Texas.

And if we are successful, we will not only win these important races in 2020, we will also develop the statewide infrastructure to ensure that we have sustainable majorities into the foreseeable future.

Something happened Monday night as I was block walking in Fort Bend with Eliz that made me feel good about what Powered by People can accomplish. The last door we knocked on in the Cinco Ranch subdivision was Lynda's. She greeted us with a smile, introduced us to her three kids and then told me that she'd volunteered for us in 2018 and is ready to get involved again. Afterwards she found us on Instagram and sent us this note:

Related Topic(s): Beto O Rourke 2020; Texas Politics, Add Tags
Add to My Group(s)
Go To Commenting
The views expressed herein are the sole responsibility of the author and do not necessarily reflect those of this website or its editors.