The Texan is demonstrating real leadership in the wake of a horrific mass shooting by unequivocally condemning racism. And Americans are responding. 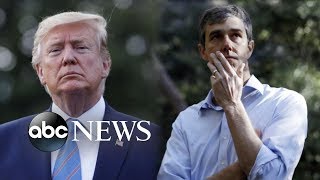 Donald Trump has dumbed down our politics, diminishing the discourse to the point where a cry at a rally or a tweet passes for a statement of principle. This is the political game that Trump has chosen to play. And he has played it well enough to dominate the debate for four long years.

But he is getting beaten this week by a better man. Beto O'Rourke is not going low in the way that Trump does. He is bringing more nuance, insight, and honest emotion to the dialogue. But he is waging the debate on all the platforms that Trump uses. And O'Rourke is winning.

After a horrific mass shooting that left 22 men, women, and children dead in El Paso, killed by a white man who targeted Latinos and whose "manifesto" echoed Trump's anti-immigrant hate speech, O'Rourke responded not as a 2020 presidential contender (or as the Senate candidate some would like him to be) but as a passionate son of his hometown.

The former El Paso City Council member and congressman held nothing back. He condemned Trump as "a racist" who "stokes racism in this country." He challenged those who might coddle Trump or make excuses for a president who takes no responsibility for vile words and deeds. O'Rourke refused to go along anymore with the standard candidate-reporter exchanges regarding the man he proposes to challenge. "What do you think? You know the sh*t he's been saying. He's been calling Mexican immigrants rapists and criminals," O'Rourke said of Trump. "I don't know, like, members of the press, what the f*ck? Hold on a second. You know, It's these questions that you know the answers to."

That reply came in an emotional moment over the weekend that saw two mass shootings in 24 hours. And O'Rourke has not backed down. He has amplified his call for the media to do a better job of examining Trump's destructive politics, declaring: "You cannot leave it up to me. Members of the press: You too have to call him out for being the most racist president since Andrew Johnson." He has proposed bold solutions, suggesting an openness to a mandatory gun buy-back program like the one implemented in Australia following a mass shooting. And he has kept calling the president out in stark and unrelenting terms.

Related Topic(s): Beto O Rourke Us Congressman El Paso; Donald Trump Narcissist; Hispanic; Killed; Latinos; Politics; Shooting; Trump Against Democracy; Trump Cruelty; Trump Racism, Add Tags
Add to My Group(s)
Go To Commenting
The views expressed herein are the sole responsibility of the author and do not necessarily reflect those of this website or its editors.