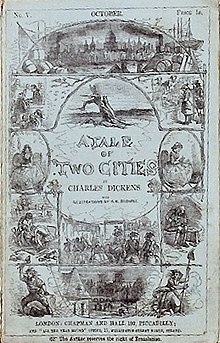 The immortal novel, A Tale of Two Cities, begins:

Actually, I think this yin-and-yang contradiction exists right now, today and probably existed at every moment since the beginning of recorded history.

These are America's worst times under a ludicrous president who has uttered 7,600 countable lies and shut down part of the federal government in a temper tantrum. But life also is good, with full employment, booming prosperity and superb personal freedoms.

Writers like Chris Hedges are correct that right-wing greed is pulling America apart in ever-worse inequality, and that industrial pollution causes global warming that threatens the planet. But writers like Steven Pinker are correct in claiming that our "better angels" cause life to improve constantly, with fewer wars, fewer murders, fewer rapes, fewer cruelties, fewer ethnic persecutions and relentless retreat of other evils.

It is the best of times, it is the worst of times and it always was.

The hero of Scaramouche was "born with a gift of laughter and a sense that the world is mad." But that's just half the story. Laughter can be dampened by grief and suffering. A better assessment of our ongoing carnival is the cliche': Life is a comedy to the person who thinks, and a tragedy to the person who feels.

Columnist Nicholas Kristof wrote that, despite daily horrors in the news, "2018 was the best year in human history." He cited:

Each day, about 295,000 people around the world gained access to electricity for the first time.

Each day, about 305,000 got safe drinking water for the first time.

Each day, 620,000 more people acquired access to the Internet.

Related Topic(s): Bad News; Donald Trump; Good News-Success, Add Tags
Add to My Group(s)
Go To Commenting
The views expressed herein are the sole responsibility of the author and do not necessarily reflect those of this website or its editors.