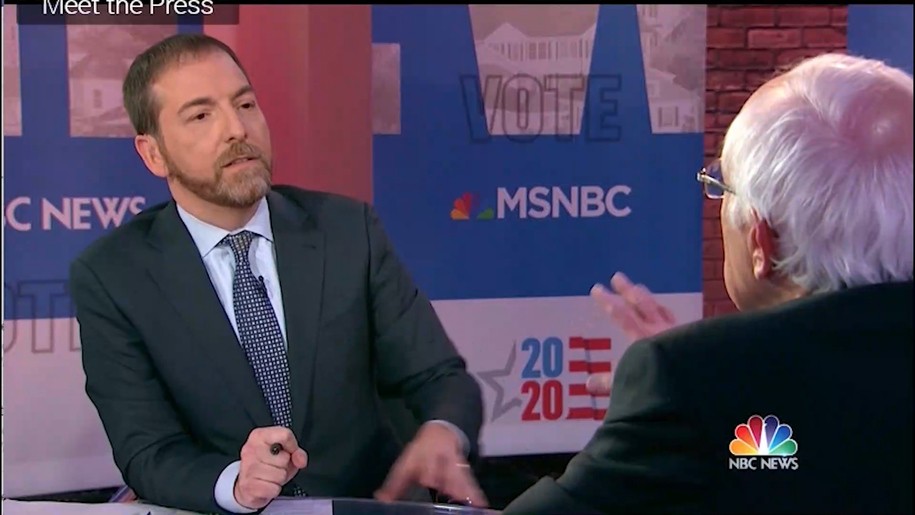 (Image by Egberto Willies)   Details   DMCA
Bernie Sanders appeared on Meet the Press with Chuck Todd. Chuck tried to make an issue with the problem Bernie would have with his self-ascribed Socialist moniker if he became the Democratic Party's nominee. Bernie illustrated how easy it will be to flip the argument.

It is important that rank and file Democrats not allow the corporate mainstream media to dictate the candidate that ultimately wins the Democratic nomination. We have been there. We have done that.

Bernie Sanders, Elizabeth Warren, Andrew Yang, and Tom Steyer present the best progressive options based on their utterances and their policy positions. Others may think otherwise but ultimately if these candidates stick to the narrative and contrast our "successful" economy with that of one's pocketbook, they will gain even more traction.

Every single one of the leading candidates has political flaws that can be weaponized and done so equally. While Bernie's self-ascribed socialist moniker may be problematic for older uninformed voters, it is clear he has no problem leaning in and letting the American people know what they are to expect to gain if he is elected.

Chuck Todd attempted to pin Bernie Sanders on Socialism claiming he has not been forceful enough against the likes of Bolivia's Evo Morales ouster. After Bernie gave him the reason why -- he does not support coups --he pointed out it is Donald Trump who is palling around with communists and authoritarians.

Donald Trump appeases Russian president Vladimir Putin, North Korean Supreme Leader Kim Jong-un, Turkey's President Recep Tayyip Erdoğan, China's President Xi Jinping, Philippines Rodrigo Duterte, and many others. Bernie along with his surrogates and a massive information campaign can turn the table on most who would make his ascribed moniker a problem.

Let's vote. And may the most effective candidate win by the vote of the people.