California's arcane and complex voting system is stealing hundreds of thousands of votes from Bernie Sanders. 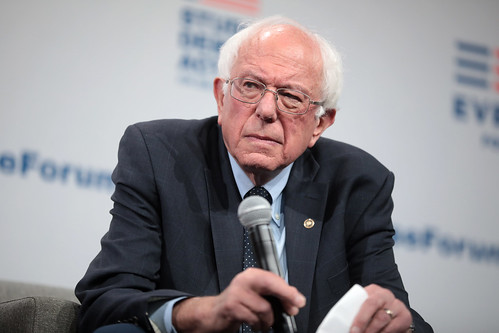 In February, California mailed 3.7 million primary ballots that, to the astonishment of many who received them, excluded the presidential candidates. These ballots do have candidates for all other primary races, including for Congress, but not the race for president"

Within this mountain of primary ballots, artifacts of California's arcane and complex voting system, lies the potential to cripple the campaign of Senator Bernie Sanders, the favored candidate among independent voters.

Particularly at risk of losing their vote are 18-to-24-year-olds and Latinx voters, groups that strongly favor "Tio Bernie." A quarter of independent voters, more than 1 million people, are Latinx, according to the Public Policy Institute of California.

Sanders, as expected, won the plurality of California's votes, but he could well be shorted out of hundreds of thousands of votes and scores of delegates.

How did this happen? While Californians, including independent voters, vote overwhelmingly for Democrats in general elections, and 5.3 million Golden State voters register "NPP," no party preference.

These 5 million independents legally have the right to vote in the Democratic primary, but the Democratic party created an inscrutable obstacle course for them to do so, one that amounts to another type of voter suppression.

The problem begins with a postcard.

Last autumn, all 5 million NPP voters were mailed a postcard allowing them to request a ballot with the Democratic party presidential choices. However, as many states have learned, postcards with voter information largely look like junk mail and get thrown out.

If the independents don't respond to the postcards, they get a ballot without presidential choices. But they have one more chance to vote for a candidate in the primaries: at the ballot box.

At the polling station, though, things remain confusing. According to rules set by the national Democratic party, the independent voters have to bring in their NPP ballot to the polling station and request to exchange it for a "crossover Democratic" ballot that lists the candidates.

However, if the voter fails to ask for the "crossover" ballot by its specific name, the poll worker is barred from suggesting it and they won't receive it.

Jen Abreu, a poll worker, told me about the disaster this created in 2016: "If this NPP voter did not specifically ask for a Democratic crossover ballot, they were given an official NPP ballot, which did not list presidential candidates."

Greg Palast's investigative reports appear in Rolling Stone, the Guardian and on BBC Television. His latest film, The Best Democracy Money Can Buy, on how Donald Trump stole the 2016 election, is available on Amazon. Palast is Patron of the Trinity (more...)
Related Topic(s): Bernie Sanders; Bernie Sanders 2020 Presidential Candidate; California Primary 2020; California Primary Has Almost 3 Million Uncounted ; Democratic; Vote Flipping; Vote Theft; Voting Integrity; Voting Machines, Add Tags
Add to My Group(s)
Go To Commenting
The views expressed herein are the sole responsibility of the author and do not necessarily reflect those of this website or its editors.