Fourteen Democratic candidates for President spoke to the delegates at the California Democratic Convention, May 31-June 2. Congresswoman Tulsi Gabbard and Senator Bernie Sanders received the most cheers cheers. The Party appeared to try to undercut Tulsi by dramatically lowering the volume in the back half of the room as she spoke. But it didn't alter her popularity. She received applause after applause.

The recipient of the biggest booing session at the convention was John Delaney , who spoke against Medicare for All. John Delaney is a former Representative from Maryland who is now running for President.Former Colorado Governor John Hickenlooper for saying that looking to socialism for an answer to America's problems is an error. How do these guys expect to win if they don't have a clue as to what the public wants? 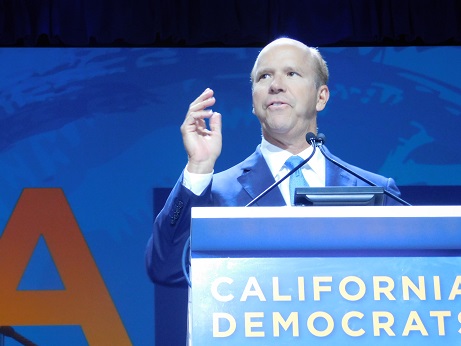 Acting Chair Alex Gallardo Rooker delivered a message from Joe Biden saying he would not be attending the convention as there was an LGBT dinner he wanted to attend elsewhere. Several delegates joked that Biden was afraid to show his face at the California Democratic Convention. A flyer was passed out that asked, "Where is Joe Biden?"

Most speakers had a teleprompter fetish and seemed to be addicted to reading their speeches. But Bernie and Tulsi didn't need any teleprompters and spoke sincerely to the delegates about real issues. The delgates rewarded them with thunderous applause.

Gavin Newsom's suspension of the death penalty in California and his admission that a significant percentage of death row inmates were innocent made him the third most popular speaker at the convention.

Saturday night, the Veterans Caucus allotted Tulsi a slot of about twenty minutes for questions from the caucus members, including time for opening and closing remarks. She is the first active duty female to run for President. One caucus member remarked that is would be an insult to veterans and military personnel in general if the DNC continued to try to rig the nomination against her. 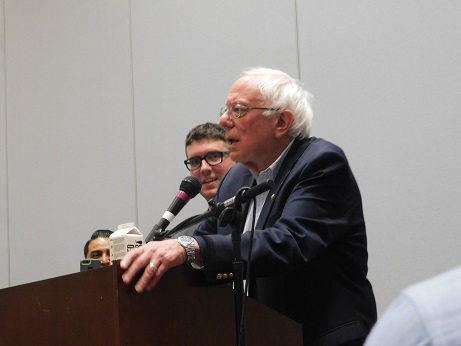 Bernie was given a four minute speaking slot at the Veterans caucus as he was not on the schedule. He has also been supportive of veterans issues. The other Presidential candidate who was allowed to speak at that caucus was John Delaney. 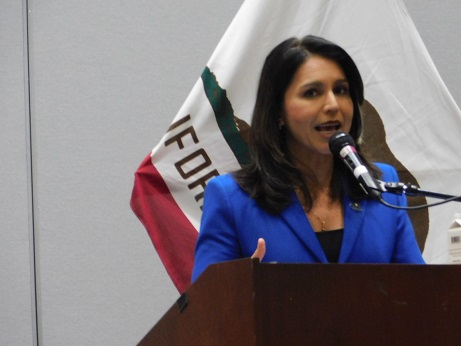 Tulsi was the hit of the Veterans Caucus though. Like Tulsi, caucus leaders expressed opposition to sending the troops into more wars. The members frequently broke out into chants of "no more war' and "Tulsi, Tulsi, Tulsi" while she was in the room.

Henry has been a professor of political science and legal ethics and an advisor to many successful candidates for public office. He is currently working on a book about the inequality crisis in America.
Related Topic(s): Bernie Or Bust; Bernie Sanders; Bernie Sanders 2020 Presidential Candidate; Gabbard-Tulsi; Gabbard-Tulsi; Medicare; Socialism; Wars, Add Tags
Add to My Group(s)
Go To Commenting
The views expressed herein are the sole responsibility of the author and do not necessarily reflect those of this website or its editors.