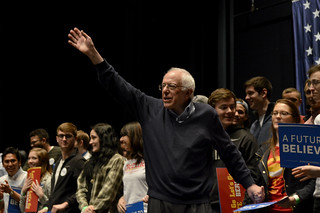 West Virginia really likes Bernie Sanders. He swept the Democratic primary yesterday, winning 51.4 percent to Clinton's 36 percent, even in the face of the mainstream media essentially declaring the race over.

Speaking in Salem, Ore., Sanders described the key to his victory: "West Virginia is a working-class state, and like many other states in this country, including Oregon, working people are hurting. And what the people of West Virginia said tonight, and I believe the people of Oregon will say next week, is that we need an economy that works for all of us, not just the 1 percent."

After winning Indiana last week, Sanders pockets West Virginia and his prospects are improving in coming contests in Oregon, Kentucky and Washington. He's vowed to keep fighting -- and winning -- through the primaries, which culminate on June 7 with the major face-off in California and several other states. (The slighted residents of the District of Columbia will vote last on June 14.)

Sanders won across the board. CNN exit polls show him winning men 53-35 and women 50-38. He won the young big again, and even edged Clinton among seniors. He won the college educated and the non-college educated (60 percent of the electorate). Over one-third of the voters were self-described independents, and he won those by more than two to one (58-22). He won voters most concerned about the economy, health care and inequality. He won those most favorable to a candidate who is honest (69-21), and who cares about people like them (59-23). Clinton once more won those most concerned about experience (75-23) but they were barely one-fifth of the electorate.

West Virginia Democrats don't like President Obama. Clinton routed him here in 2008. But this time, Clinton has clearly defined herself as the candidate of continuity. Only one-fourth of Democratic primary voters (26 percent) wanted to continue Obama's policies. Clinton carried those 68-30. Sanders remarkably won both those who wanted more liberal policies and those who wanted less liberal policies than Obama.

Sanders keeps winning primaries, adding delegates and whittling away at Clinton's pledged delegate lead (now up by about 286). He's now won 19 primary contests (20 if you include Democrats abroad). In the face of a Democratic establishment and mainstream media eager to put the primaries behind them and get on to the main event, he keeps drawing massive rallies and demonstrating the power of his message.

And he's clearly pushing Clinton to move to a bolder agenda. She recently doubled down on her opposition to the president's Trans-Pacific Partnership deal, opposing a vote in the lame duck session of Congress and calling for a new trade approach that works for working people. This week, she announced her support for a public option in Obamacare, and for allowing people of "a certain age" -- 55 or 50 -- to buy into Medicare. Sanders immediately dubbed it "Medicare for some" but it clearly demonstrates the continuing influence of his campaign to move Clinton and the party to a more progressive message.

Sanders vows to keep going to the end. If he continues to win -- particularly if he culminates by winning the diverse Democratic vote in California, he'll make the case to Democratic super delegates that he would be the strongest candidate in the general. Sanders fares better than Clinton against Trump in poll after poll.

Democrats and the Clinton campaign have to be sobered by this week's Quinnipiac polls showing Trump -- even as a quarter of Republicans say they won't vote for him -- running neck and neck with Clinton in Pennsylvania and Ohio. Trump's alienation of women (Clinton leads by double digits, 19 percent in Pennsylvania) is countered or exceeded by his margins among men. Both are unpopular, with her negatives now matching or exceeding his. Remarkably, voters think she is more dishonest than the Donald. Trump leads in all three states as the one most qualified to handle the economy, the most serious issue in the election. Trump leads among seniors; Clinton among the young. She'll need Sanders' energy to insure that they actually turn out to vote.

Sanders has every reason to stay in the race. He's unlikely to overcome Clinton's margin in pledged delegates. But even if he doesn't succeed in convincing super delegates that he's the stronger standard bearer, he'll still take the momentum from continuing primary victories and over 1,600 delegates into the convention in Philadelphia and push for a bolder party platform. If she keeps moving his way, Clinton might end up a stronger candidate as a result.

Americans are not going to elect Donald Trump president of the United States. But if Clinton runs as the status quo candidate of experience, she just might make a race of it.

Related Topic(s): Bernie Sanders; Bernie Sanders Endorsements; Democratic; Polls, Add Tags
Add to My Group(s)
Go To Commenting
The views expressed herein are the sole responsibility of the author and do not necessarily reflect those of this website or its editors.