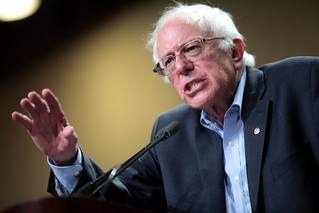 We keep hearing the pundits talking about how Bernie Sanders needs to drop out and herd his supporters to the polls for Hillary Clinton. The problem with this is Bernie's supporters are not sheep. What the Democrats must understand is that many Sanders supporters haven't voted for Democrats in decades. They are not going to fall in line and vote for Hillary because Bernie tells them to. Hillary Clinton and the Democratic Party have to earn them back.

Both political parties are shrinking; both are owned by the billionaire class. 39% of Americans are not members of either the Democrat or Republican party, 32% are registered Democrats, and less than 30% are Republicans. The solution is political reform. It's time for a Democracy movement in America and that is what the political revolution is for me. I don't want to waste the momentum of the movement launched by Sanders and just fall into line and vote against the Republicans again. I want to be part of a real movement, not be a lamb that the Democrats can count on every four years.

The Democratic Party needs to earn my vote and the votes of millions of progressives who feel the party left us decades ago. What they don't understand is that if Bernie dropped out tomorrow and told his supporters to support Hillary and just went back to being Bernie, the Senator from Vermont, his supporters would be devastated and feel like they had wasted the past year of their lives.

In Nevada, the party insiders got the result they wanted on the first vote so they blocked any recounts. A couple of months ago in Iowa, at the county level, there were multiple recounts until a Sanders victory turned into a Clinton victory. There are plenty of things to get angry about during the Caucus process. But the anger at the Nevada caucus could have been channeled in a more constructive manner. Threats of violence against the caucus chair were not the way to go. The violence should be condemned. At the same time, the process needs reform so we don't find ourselves in the same situation in the future.

The Clinton campaign and Nevada Democratic leaders would be closer to winning over the Nevada Sanders supporters had they not tried to silence their voices. If the Bernie backers had felt like they were heard, the unifying could have begun. If the party leaders in Philadelphia try to ram through the rules and platform, they will make it harder for the Sanders vote to move to Clinton. The political revolution will continue past Philadelphia and the movement will remain politically active. If party leaders want to create an environment that encourages the Berners to vote Democrat in November, they had better make them feel welcome at the convention in July.

"It is imperative that the Democratic leadership, both nationally and in the states, understand that the political world is changing and that millions of Americans are outraged at establishment politics and establishment economics," Sanders said in a public statement. "The people of this country want a government which represents all of us, not just the 1 percent, super PACs and wealthy campaign contributors."

Sanders went on to say: "The Democratic Party has a choice. It can open its doors and welcome into the party people who are prepared to fight for real economic and social change -- people who are willing to take on Wall Street, corporate greed and a fossil fuel industry which is destroying this planet. Or the party can choose to maintain its status quo structure, remain dependent on big-money campaign contributions and be a party with limited participation and limited energy."

Bernie expanded on that statement at his rally in Carson last night. The video below is long, but if you fast forward to 1:09:56 and watch until 1:12:40 you will hear Bernie Sanders' new focus, opening the doors of the Democratic Party and defeating Donald Trump. Bernie's focus is not to damage Hillary Clinton. The Clinton campaign should continue to focus on Donald Trump and reach out to the Sanders camp with real reform and not just wait them to fall in line like sheep.

Scott Galindez is a graduate of Syracuse University, a US Army veteran, and currently the Political Director of ReaderSupportedNews.org. Scott's activism began at an anti-nuclear vigil in Lafayette "Peace Park" across from the White House. Scott (more...)
Related Topic(s): Bernie Sanders; Politics; Sheep; Supporters, Add Tags
Add to My Group(s)
Go To Commenting
The views expressed herein are the sole responsibility of the author and do not necessarily reflect those of this website or its editors.