Democratic presidential candidate Bernie Sanders, who vows to "break up the big banks," has also vowed to deploy his presidential powers, if elected, in a manner aimed at overturning the US Supreme Court ruling Citizens United. The 2010 ruling by the Roberts Court has unleashed a deluge of money from corporations and billionaires into the American political process. Sanders says he will make Citizens United a litmus test for any Supreme Court nominations he may make, writing on his issues page for "Getting Big Money Out of Politics and Restoring Democracy" that he will:

The Citizens United decision was a 5-4 decision with recently deceased Justice Antonin Scalia voting for it, making it a vote away from reversal. The average age of the Supreme Court Justices is 76, with Kennedy reaching 80 this year.

Sanders says he will deploy the power of the presidency in support of a constitutional amendment to overturn the ruling.

Sanders was one of the first to introduce a constitutional amendment to overturn the ruling after it was handed down, changing the American political landscape by equating money with speech. University of Berkeley linguist Professor Robin Lakoff likens the Supreme Court's reasoning to confusing a person's speech with the megaphone or speaker which amplifies it:

money is to speech like a megaphone or microphone: it amplifies its effectiveness, spreading it around and giving it more substance. But we would not include the microphone or megaphone used to transmit language as a part of the communication, or an aspect of its meaning. It is merely a tool that can be used to potentiate an utterance.

The Sanders amendment helped spawn a citizens' backlash against the Citizens United ruling, the largest of which is MovetoAmend.org.

One effect of Citizens United has been to spawn a class of politically active billionaires who can spend more than the parties themselves in support of, or against, any given political candidate or office holder. Sanders says at his website:

We know, for example, that the Koch brothers, the second wealthiest family in America, have made public that they and their network intend to spend at least $750 million on politics during this election. This is more money than either the Democratic Party or the Republican Party will spend.

The Citizens United ruling has been criticized by observers across the political spectrum, with the Washington Post reporting that almost as many Republicans in one set of interviews were against the ruling as Democrats. 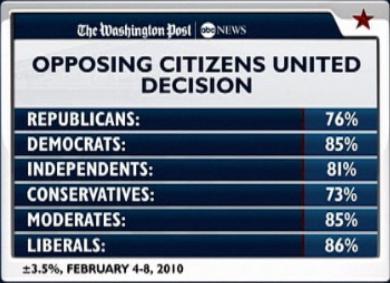 Let's be honest and acknowledge what we are talking about. We are talking about a rapid movement in this country toward a political system in which a handful of very wealthy people and special interests will determine who gets elected or who does not get elected.

The fight Sanders picks with Citizens United is in tandem with the one he has advanced against "too big to fail" banks. Sanders has said, in one of his mot widely broadcast television ads, that he intends to break up these banks so that they cannot threaten the entire economy should they fail. In the same ad, he proposes free college and debt refinancing in America, to be paid for by a fraction of a percent tax on stock, bond, and derivatives trades.

Multiple recent polls have shown Sanders to be stronger than Clinton when matched head-to-head with Republican front-runner Donald Trump in the general election. Sanders beats Trump soundly outside the statistical margin of error, by six points, while Clinton enters a statistical tie.

Sanders supporters counter contentions that a socialist cannot be elected by pointing out that the US is already rife with socialism, for corporations and the wealthy. The conservative National Review calls out Trump for hypocrisy when he attacks Sanders' socialism, with Trump himself being the beneficiary of eminent domain takings and supporting corporate subsidies such as for corn ethanol, and the bank bailouts of 2008.

Sanders distances himself from the ideological socialism of his youth, saying: