As pundits rush to declare the race over, Robert Reich, Tulsi Gabbard, and Alan Grayson say, "Not so fast." 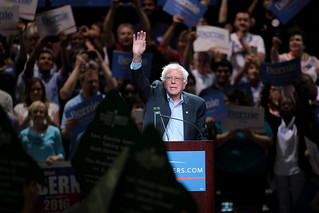 Even before Hillary Clinton beat Bernie Sanders by a wide margin in the South Carolina Democratic presidential primary, the political and media elites that police American democracy were busy writing Sanders out of the running.

This is what happens in American politics. From the earliest stages of the primary process, pundits and political operatives try to wrap things up in tidy little boxes of conventional wisdom. Again and again, the message is delivered: Everything is finished but the final counting up of delegates, despite the fact that the vast majority of states have not voted. The pressure to conclude the competition disempowers voters and damages the discourse, and candidates have every right and reason to resist the rush to shut the competition down before it has really begun.

But resistance is futile if a candidate gets no encouragement to challenge the emerging narrative.

That is one of the reasons why a once-crowded Republican presidential race is a whole lot less crowded these days.

Something has upset the rush to write off Sanders, however. It seems that a good many Democrats, including several prominent partisans who just endorsed the insurgent, are disinclined to embrace the conventional wisdom.

Clinton had a very good Saturday in South Carolina--The March primary schedule offers her plenty of openings to solidify that status, and this had headline writers declaring: "Sanders supporters may soon have to choose between Clinton and Trump."

Yet the primary schedule goes on through June 14, with a number of states that are friendly to Sanders voting in April and May, and the biggest prize for both candidates (California) up for grabs on June 7.

Sanders says he can go the distance. And his supporters signaled that they are ready for the long run.

Immediately before and after South Carolina's primary voting, Sanders spoke to huge crowds in Dallas and Kansas City and Tulsa and Oklahoma City, communities where few would have predicted even a year ago that a democratic socialist would attract thousands of cheering supporters. At the same time, the senator won two of the highest-profile endorsements of his run.

Related Topic(s): Bernie Sanders 2016 Presidential Candidate; Campaign Ethics; Democratic; Politics, Add Tags
Add to My Group(s)
Go To Commenting
The views expressed herein are the sole responsibility of the author and do not necessarily reflect those of this website or its editors.