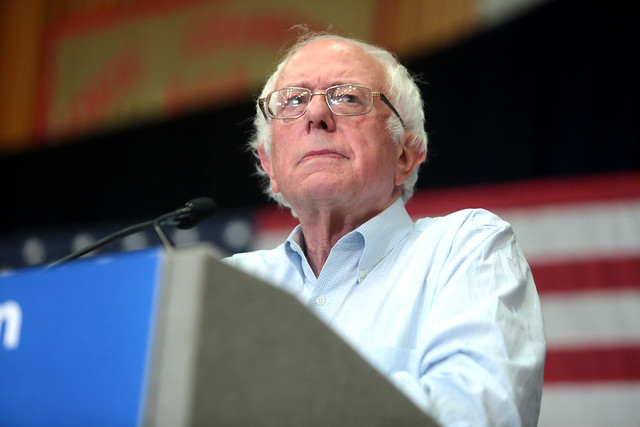 They don't get it.

Mainstream journalists routinely ignore the essential core of the Bernie 2020 campaign. As far as they're concerned, when Bernie Sanders talks about the crucial importance of grassroots organizing, he might as well be speaking in tongues.

Frequently using the word "unprecedented" in phrases like "our unprecedented grassroots effort to take on the powerful special interests and billionaire class" Sanders emphasizes the vast extent of organizing necessary for him to win the Democratic nomination and the presidency next year. For an extraordinary campaign, that could be attainable. For mainline media, it's virtually inconceivable.

The conformist political reporters are akin to inept topside oceanographers who stay away from the depths while scrutinizing the surface and speculating on future waves. Time and again, the sea changes that come from below take them by surprise.

Four years ago, the media wisdom was that the 2016 Sanders campaign would scarcely get out of single digits. Media savants dismissed him and the political program that he championed as fringe. In timeworn fashion, when reporters and pundits made reference to any policy issues, the context was usually horseracing, which is what most campaign coverage boils down to.

Yet policy issues and the passions they tap into are central to what propels the Sanders 2020 campaign, along with the powerful fuel of wide recognition that Bernie Sanders has not bent to the winds of expediency. That goes a long way toward explaining the strength of his current campaign.

Sanders has retained the enthusiastic support of a big majority of his delegates to the 2016 Democratic National Convention. Last winter, when more than 400 of those delegates participated in a vote on whether to revive the independent Bernie Delegates Network, 95 percent said yes. (I'm a coordinator of the relaunched network.)

Unlike his "evolving" rivals who have blown hither and yon with political gusts, Sanders is not a wind sock. During 38 years as an elected official, he has remained part of progressive social movements to change the direction of prevailing winds. That orientation continues to inform his approach to elections.

"At the end of the day," Sanders told a New York Times reporter in late April, "I believe now and I've always believed that grassroots activism is more important and more effective than 30-second television ads." Such an outlook has been a perplexing concept for many political reporters, who routinely see the bottom-up activism of social movements as distinctly minor compared to the top-down mechanisms and poll-driven strategies that can boost a campaign to victory.

Right now, the conventional media wisdom is gaga over Joe Biden's big lift in national polls since he announced for president a week ago. The former vice president was barely ahead of Sanders in polling before he formally threw his hat in the ring on April 25. The normal upward spike after a major candidate's formal announcement roll-out was made spikier by the lavish and largely reverential coverage from the many journalists who seem quite fond of him.

Retrospective looks at his treatment of Anita Hill during the Senate Judiciary Committee confirmation hearings for Clarence Thomas that he chaired in 1991 caused Biden some bad media moments during the last week. But surprise! he got little corporate media flak for his high-dollar campaign kickoff fundraiser hosted by top executives at Comcast and Blue Cross, which epitomized his flagrant embrace of corporate power throughout a long political career.

"It is not remarkable in the least for Joe Biden to come right out of the gate by filling his coffers with money from telecom and health insurance executives," Hamilton Nolan wrote for the Guardian. "Who is going to tell him that he shouldn't? The lobbyists advising his campaign? The zillionaire media executives feting him in a Hollywood mansion? The superstructure of Obama administration functionaries who see him as the most established of the establishment brand names? For the people who matter, Joe Biden is doing just what he is expected to do."

As he tries to gain support from liberal voters, Biden is benefiting from the ties that bind him to corporate power. So, he can be grateful that as the media watch group FAIR has reported the Comcast-owned MSNBC quickly showed itself to be "in the tank for Joe Biden's presidential run."

It's likely that the Biden balloon will lose altitude as the burst of hot-air publicity fades and as more information about his actual record comes to wider light. Biden vs. Bernie offers a huge contrast between a corporatist whose biggest constituencies can be found on Wall Street and in corporate media vs. a progressive populist whose biggest constituencies can be found among those being ripped off by Wall Street and discounted by corporate media.

Related Topic(s): Activism; Bernie Sanders; Bernie Sanders 2020; Joe Biden; Media; Racism; Reporters, Add Tags
Add to My Group(s)
Go To Commenting
The views expressed herein are the sole responsibility of the author and do not necessarily reflect those of this website or its editors.