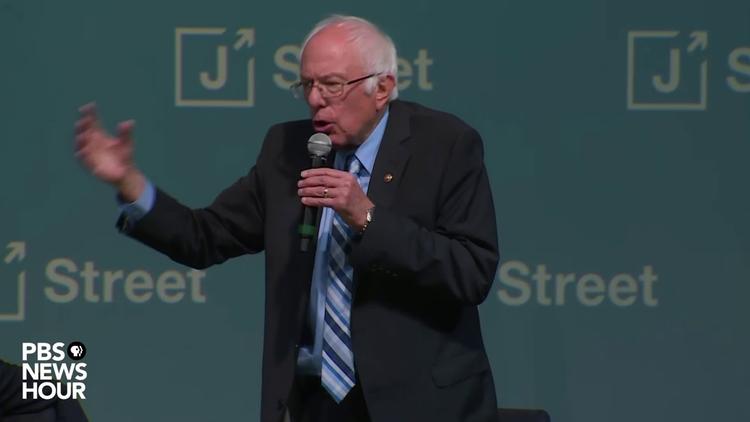 Bernie Sanders has almost single-handedly changed the discourse on Israel in the Democratic Party and in the United States more generally. But his appearance at the J-Street conference was a further tour de force, and the positions he has staked out clearly have put pressure on the other Democratic candidates to take a position on Israeli land-grabs in the Palestinian West Bank and economic strangulation of the Palestinians in Gaza.

Sanders said in his address that Palestinians also want peace. He said, "let me underline this" and continuing, "It is not anti-Semitism to say that the Netanyahu government has been racist."

The Israeli government has egregiously violated the Oslo Peace accords by flooding hundreds of thousands of Israeli squatters into the Palestinian West Bank. This is actually a war crime according to the Fourth Geneva Convention of 1949, which was designed to forestall any repeat of the atrocities of the fascists and Nazis during WW II. These squatters have usurped Palestinian property, dug deep wells to leave Palestinian villages without water, have sabotaged Palestinian olive harvesting by cutting down a million trees, cut up the West Bank with a network of roads and checkpoints, and denied Palestinians the rights of citizenship in a state (the right, a US Supreme Court justice said, to have rights).

Israel gave up trying to colonize the Gaza Strip only because it could not provide security to the 8,000 squatters that had gone in there to encroach on Palestinian land and resources. But then it slapped a blockade on the small territory. It had bombed the airport to smithereens, and won't let so much as Palestinian fisherman get more than four miles off the coast. At one point the Israeli military tried to figure exactly how much food could be let in to prevent the Palestinians from starving without allowing them any nutrition beyond that. They denied chocolate to the children. That is just creepy.

In the past 18 months Palestinians in Gaza have been demonstrating weekly, and Israeli army snipers have shot down over 8,000 of them, leaving many crippled for life and killing over 200 dead from gunshots. Most of those shot were peaceful demonstrators posing no danger, who simply came into a zone the Israeli army arbitrarily declared off limits, even though it was inside Gaza. Victims include children, women, medics, journalists, and other nonviolent noncombatants.

If any other country behaved this way, the US Congress would slap them with sanctions. In fact, as bad as Turkey's behavior toward the Syrian Kurds has been, it is minor compared to what the Israelis have done to the Palestinians, but Congress rewards the Israelis while planning sanctions on Turkey.

Criticizing these policies, which everyone concerned with human rights in the world does, is not equivalent to disliking Jews. The only reason the question even comes up is that the Israel lobbies and the organized-crime-like Likudniks have attempted to deflect any obstacle to their colonization drive by smearing human rights activists as bigots for daring to oppose their monstrous plans.

Bernie Sanders is here to say that that tactic is not right, and does not have a leg to stand on.

Israeli apologetics are not completely incorrect. They charge Palestinians with having committed terrorism. Undeniably, some have. But out of 5 million Palestinians living under the Israeli jackboot, amazingly few have turned to violence, and Israeli usurpation of their property or subjecting them to a blockade harms all 5 million. Collective punishment is illegal in international law. Half the Palestinians in Gaza are children and are hardly terrorists. In 2000 to 2014, a study found that 7,065 Palestinians and 1,101 Israelis had been killed in political violence. That is, 87% of deaths were Palestinian. And there are Israeli terrorists, as well, who stage attacks on Palestinian civilians in the West Bank.

Where Israeli apologetics do become inaccurate and indeed horrible is when they paint all Palestinians as terrorists, or "animals," or sub-human. "Those people," it is said, "only understand force." Those people.

Bernie continued, "I believe that at a time when we spend, I think it is $3.8 bn dollars [annually] on military aid to Israel, we have a right to say to the Israeli government, that the United States of America and our taxpayers and our people believe in human rights, we believe in democracy. We will not accept authoritarianism or racism. And we demand that the Israeli government sit down with the Palestinian people and negotiate an agreement that works for all parties.

He thundered, "What is going on in Gaza right now for example is absolutely inhumane, it is unacceptable, it is unsustainable."

Sanders admitted that there are problems with the Palestine Authority in the West Bank and the Hamas statelet in Gaza, of corruption.

It was pointed out that Gaza is becoming unlivable, and Sanders concurred and complained about the restrictions on Palestinian movement (some die every year because they need specialized medical treatment and Israel won't let them travel for it).

Related Topic(s): Bernie Sanders 2020 Presidential Candidate; Hamas; Israel; Palestinian; Rights, Add Tags
Add to My Group(s)
Go To Commenting
The views expressed herein are the sole responsibility of the author and do not necessarily reflect those of this website or its editors.