He was absolutely right to oppose the Vietnam War and the Iraq War, and he is right to now oppose war with Iran. 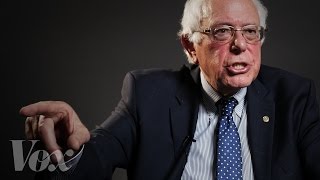 After Bernie Sanders appeared on NBC's Meet the Press last Sunday, the program's Twitter account announced that "Bernie Sanders said he won't apologize for supporting anti-Vietnam War efforts and voting against the war in Iraq."

He was right to oppose the Vietnam War.

He was right to oppose the Iraq War.

He is right to now oppose the maneuvers that might lead to war with Iran.

Sanders used his Meet the Press appearance to present himself as a candidate whose inclination is to prevent rather than initiate wars. That does not make Sanders a pacifist; he has not opposed every call to arms. But he has generally been on the side of diplomacy as opposed to armed conflict. And his willingness to defend an anti-war stance on a Sunday-morning talk show was a refreshing rejoinder to the casually militaristic approach that characterizes so many media discussions of foreign policy.

In the key exchange on Meet the Press, moderator Chuck Todd began by mentioning recent New York Times coverage that imagined there was something controversial about the presidential contender's record of opposing the wrongheaded policies of past presidents -- including the Reagan administration's support of murderous right-wing groups that operated in Latin America during the 1980s. "The New York Times spent a lot of time talking about your trips to Central America. I know you got pretty worked up about those things," said Todd. "I think the larger question, and let me just frame the question this way: The larger question's going to be, if you're the nominee, whether you like it or not, the right's going to basically hammer-and-sickle you to death. How do you prevent it?"

Related Topic(s): Anti-war; Bernie Sanders; Bernie Sanders 2020 Presidential Candidate; Wars, Add Tags
Add to My Group(s)
Go To Commenting
The views expressed herein are the sole responsibility of the author and do not necessarily reflect those of this website or its editors.