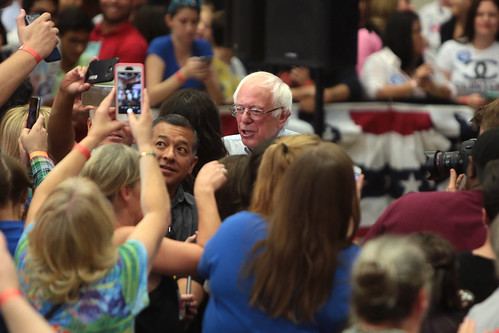 How do you think Joe will respond? This will be interesting.

Here's the press release from The Sanders Campaign.

Loan sharks charging exorbitant interest rates have moved from the shadows of the criminal underworld to broad daylight in corporate boardrooms.

You're not going to see Jamie Dimon the CEO of JPMorgan Chase lurking in a dark alley. He doesn't need to. Thanks to sky high fees, usurious interest rates, and plain Wall Street greed he's now worth $1.4 billion.

Millions of people now pay credit card interest rates as high as 30 percent. That's not banking. That's loan sharking. And it's time to stop it.

That is why I am introducing the Loan Shark Prevention Act in the Senate. This plan will cap credit card interest rates at 15 percent so that we can stop financial institutions from extorting the American people.

I'm inviting you to become a citizen co-sponsor of the Loan Shark Prevention Act. While I am introducing this plan with some of my colleagues in Congress, I want to send an unmistakable message to big banks that our movement is right alongside us.

Add your name as a citizen co-sponsor of the Loan Shark Prevention Act to cap credit card interest rates at 15 percent. Let's show big banks that their time of ripping off the American people is over.

It didn't always used to be this bad for consumers. But a Supreme Court decision in 1978 overturned state-based interest rate caps, which were as low as 8 percent. Congress capped credit union interest rates at 15 percent in 1980. And as recently as 1991, the Senate voted for a 14 percent cap on credit card interest rates.

Those days are long-gone. Now big box stores issue credit cards to customers with interest rates around 27 percent. That means if you buy a bed mattress for $600 on a store card, you'll pay an additional $162 in interest.

Call it what you will usury, extortion, loan sharking in any case, it is an unacceptable burden.

Companies and their CEOs are getting rich off of this, of course. The CEO of American Express walked away with $370 million in total compensation. Stores like Macy's and Kohl's make at least 35 percent of their TOTAL income from interest rates on credit cards.

In addition to capping credit card interest rates, I want to allow the Postal Service to offer banking options. We need to expand access to banking for people left behind by big banks.

Related Topic(s): Bernie Sanders; Credit Cards; Joe Biden, Add Tags
Add to My Group(s)
Go To Commenting
The views expressed herein are the sole responsibility of the author and do not necessarily reflect those of this website or its editors.