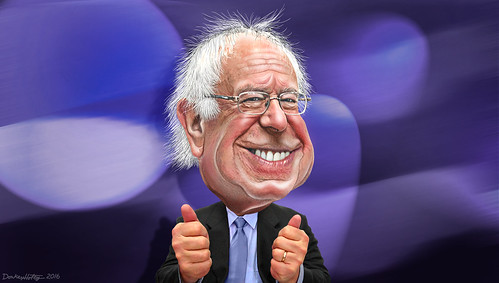 I really admire Bernie Sanders and I give him most of the credit for changing the way Americans think about their government. Saying this however, there is one aspect of Bernie that really gets in my way about supporting him.

I understand what he says about income inequality. I understand him when he talks about the billionaires and trillonaires getting enormous tax breaks while middle-class and the poor see their paychecks unchanged. I understand him when he talks about Medicare for all and lowering prescription drug prices. The entity in the government that can negotiate drug prices is Medicare. Giving Medicare for all would kill two birds with one stone by allowing America's healthcare to negotiate the price of drugs from the pharmaceutical companies that are raping the general public.

I also understand the need for more comprehensive background check for people that want to buy weapons. This is something that should have been dealt with a long time ago and believe most of the country is with him on that subject. He has voted consistently for women's right to control their own bodies and seek medical care for abortion. You can, and should check out this man's voting record in the Senate, and you can check that out here. I did my homework and actually looked to see if Bernie walked the way he talked, and I found out that he did.

The thing that really bothers me about Bernie's run for the presidency is that he is obsessed with all the things that I mentioned above. What I want to hear about its his take on foreign policy. I believe that Bernie Sanders has voted against the military-industrial complex, but he doesn't mention it in his stump speech that frankly, it's getting old and stale. I'm kind of leaning in favor of representative Tulsi Gabbard. I believe the perfect ticket would be Bernie Sanders as President and Tulsi Gabbard as Vice President. Gabbard talks about the things that Sanders will not. I think that Bernie should listen to Gabbard and tell the American people that endless war and the wish to create an American empire is bankrupting our nation. I'm sure that most people understand that the military budget is 54% of the discretionary budget for America.

Saying this, I still would like to see Bernie Sanders address these issues as well as climate change and income inequality. I look at his voting record and I understand that he has not voted to increase the military budget. I would also like him to talk more about what is happening in Yemen and Venezuela. It seems that the Trump administration is preparing to engage Venezuela in military confrontations leading to regime change. He needs to talk truth to power and tell this government that involving the United States in the affairs of other sovereign nations affairs while bemoaning the fact that Russia paid Facebook ads in the amount of $5000 is totally hypocritical. It is not a clear and present danger to the US, and interference in a sovereign nations internal affairs is against the UN Charter and International law.

The fact that people in Yemen are starving to death while being bombed with weapons and support from America is reprehensible. He needs to talk about the belligerency of the Trump administration. He needs to call out the United States on its military budget that is over seven times larger than the next three countries. This is an affront to anyone that has a brain. While Congress debates the price of Medicaid and Medicare which is about 10% of the discretionary budget it has no qualms about 54% of the budget going to the defense contractors in the military. This is a crime and should be stopped.

If Bernie wants to when the Democratic nomination, he really needs to stand up on America's foreign policy much more than he does. If he thinks that domestic issues of income inequality and the gray new deal will catapult him to the Democratic nomination, he needs to think again. People already understand the message that he gave us in the 2016 primary that was stolen by Hillary Clinton, and the DNC. People can think about two things at once, they can walk and chew gum at the same time. We all understand about the student debt crisis in the healthcare crisis and we all know that if Sanders is elected, he will do his best to change the way the government handles these problems. When people ask how he is going to pay for the green new deal and Medicare for all, he should point to the military budget and tell the American people that we can close some of the 800 bases we have around the world and stop the insane drain on our budget that goes to the military.

Yes Bernie, were all with you and hope that your campaign is successful. We need to root out all the corporate Democrats including Kristin Gillibrand, Cory Booker, and Kamala Harris along with the possibility of seeing Joe Biden in the race. If I had any advice to give to Bernie Sanders is that the domestic problems in the United States goes together with our foreign policy. My title is staff Sergeant Timothy Gatto, US Army (Ret). I am not anti-military and I am not a person who has never served in the military the things they know more than the people who serve. This is particularly true of the narcissistic president that we have serving now, that believes he is responsible for all the good things in America. We need to get rid of this man before he starts something he can't think his way, and thinks he is a dictator by side-stepping Congress with executive orders. out of. Good luck Bernie, just try to take some advice from an old cold warrior.