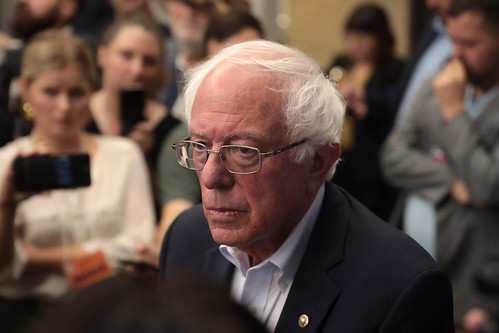 Bernie Sanders has bent the knee to Joe Biden and the corporate Democratic Party establishment. In a livestream with Joe Biden, Sanders vowed to do everything in his power to get his former opponent elected as the next president of the United States. Many of Sanders' closest supporters, including his National Press Secretary Briahna Joy Gray, disagreed with the endorsement. Gray tweeted that while she respected Bernie Sanders, she would not fall in line with him and endorse the neoliberal favorite of the DNC. The Democratic Socialists of America and its many student organizations also declined to endorse Biden.

What happened afterward is perhaps even more disturbing than Bernie Sanders' decision to drop out of the race and endorse a candidate like Joe Biden who spent the entire primary up until this point mocking Bernie Sanders and his popular base of support. In an interview with the Associated Press, Sanders declared that it would be irresponsible for his supporters to "sit on their hands" and not vote for Joe Biden. He reiterated that Briahna Joy Gray is a former employee. This seemed to signal that Sanders is distancing himself from anyone who doesn't agree with his decision to endorse Joe Biden. Bernie Sanders not only bent the knee to the DNC, but he has also resorted to bullying his most loyal supporters in the process.

That Bernie Sanders is more loyal to the DNC than his grassroots donor base provides a harsh lesson about the nature of political power in Washington. Just days after Bernie Sanders endorsed Joe Biden, Barack Obama made his official declaration of support for his former Vice President. Obama had been in the background wielding his influence over the nomination process since Bernie Sanders won the Nevada primary. It was Obama that spoke with South Carolina representative Jim Clyburn to endorse Biden before the vote in South Carolina. Obama also helped facilitate Amy Klobuchar and Pete Buttigieg's exit from the race directly before Super Tuesday. While Obama has been hesitant to support Joe Biden, his overall mission has always centered on destroying Bernie Sanders and his pesky social welfare agenda.

Bernie Sanders and his popular base of young people and low wage workers never possessed any real influence over the corporate state. Only a massive grassroots movement that leverages both a set of demands and the willingness to disrupt the affairs of the corporate elite could have wielded any influence over the Democratic Party primary. And even then, it would be difficult to imagine anything other than a full split in the Democratic Party. Bernie Sanders' movement possessed a set of demands but lacked a willingness to disrupt the affairs of a political process rigged against it. As the leader of the movement, Bernie Sanders was willing to popularize Medicare for All, a Green New Deal, and a list of social welfare policies but repeatedly ceded power by calling Joe Biden his "friend" who could defeat Donald Trump. Such an approach could not survive the onslaught of attacks thrown at Sanders by the Democratic Party establishment.

Many of Sanders' most loyal supporters understandably feel immense pain and anger over the behavior of their beloved candidate. Indeed, while I never endorsed Sanders or believed he would be tolerated by the DNC, my hope was that his campaign could at the very least facilitate a massive fracture of the party apparatus at the nominating convention this summer. Those hopes have been dashed, for the moment. Bernie Sanders has thrown his weight with Joe Biden and has nothing to show for it. Biden did not alter his policy platform or any aspect of his campaign for Bernie Sanders. Bernie Sanders effectively used his one million-plus volunteers and his tens of millions worth in small donations to run an issue-oriented campaign that viewed winning as secondary to Democratic Party unity.

Bernie Sanders' self-inflicted demise is certainly cause for dismay. But in the age of COVID-19, despair is just another shackle that offers nothing in the way of building the kind of mass movement we need to address the large number of problems facing working people. There is only one viable option out of the Sanders debacle: militant grassroots organizing. Workers, the unemployed, prisoners, students; these groups lack the organization necessary to assert their interests and disrupt the ruling class at the point of production. Such organizing holds few immediate rewards and has none of the notoriety or prestige of a Democratic Party-driven campaign. What it does possess is the possibility that a new vision for society can emerge from the struggle of the people themselvesa vision which is unbought and unpressured from the Democratic Party's corporate apparatus.

Luckily, the Bernie Sanders campaign has millions of people who are willing to support the struggle of working people for a better life. In fact, many of Bernie Sanders' supporters work at Wal-Mart, Starbucks, and Amazon. These corporate giants are the lifeline of the low-wage capitalist economy that fuels the war, racism, and poverty currently suffocating the lives of workers every day. Bernie Sanders' base must not be allowed to fall into reactionary defeatism or the notion that there really is no alternative to neoliberal imperial decay. They must also not be left to believe that holding their nose for Biden is viable, either. Both options only serve capital, and capital alone.

The struggle against reactionary defeatism is long and hard. Dedicated and advanced activists, organizers, and journalists must come together to popularize a revolutionary conception of history and politics. New organizations must be formed that deal with pressing problems set to worsen from the multitrillion-dollar bailout of finance and multinational capital. The mutual aide should not be shunned despite its limitations. Working people will need to survive the nightmare before aspirations can be made a reality. But the real work is in building power and figuring out what kind of organization will facilitate it.

Journalists cannot necessarily lead the movement we need, but they can give voice to it. Any left journalist still hoping to empower some insurgent candidates like Bernie Sanders to achieve their dream of a New Deal through the Democratic Party needs to wake up. Our voices are better off discussing the true character of the Democratic Party and the historical conditions that led to the situation before us. The working class needs a vehicle to fight for its interests, but it also needs ideological direction. Bernie Sanders provided a path forward to capitulation to our class enemies. And more of the same will only lead to new paths of defeat within the corporate jaws of the Democratic Party.