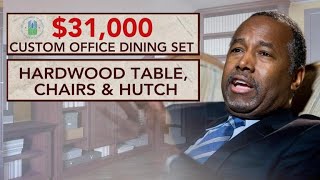 Ben Carson reportedly spent $31K on his office dining set while HUD was planning to cut programs for the homeless, elderly and poor.
(Image by YouTube, Channel: CBS This Morning)   Details   DMCA

Ben Carson, the Secretary for Housing and Urban Development, received some unwanted attention this week over a $31,000 dining room set that was ordered for his office, reportedly at his wife's request.

The average income for a rural household receiving rental assistance from Carson's department is $10,504, roughly one-third the cost of Carson's newly-ordered office decor.

This plutocratic administration's sense of noblesse oblige recalls the 5th Marquis of Anglesey, who had his car modified to emit perfume from its tailpipe while he squandered his fortune on costumes and jewelry.

But that's not the most outrageous thing about this story.

Carson's defenders, including a department spokesperson, blamed a department official who ordered the furniture. They would have us believe that a craving for gilded-age de'cor spontaneously arose in the heart of a career government employee, unbeknownst to the upright and abstemious Dr. Carson.

The department's denials -- also paid for, we might add, at government expense -- do not have the ring of truth to them, to put it mildly. But that's not the worst outrage, either.

This is: As Carson was being pampered with office furnishings reminiscent of Louis XIV, his department was seeking $8.8 billion in cuts to programs that help low-income Americans. He wanted them to include massive cuts to the housing voucher program.

That was even too much for Congress. It added $2 billion back into the budget, including $700 million for housing vouchers. More cuts are to be expected in coming years.

What's the human cost of this policy -- for, say, a homeless family waiting for shelter?

"Let's say you're a family that's been on the waitlist for 10 years, and your name is finally about to come up," housing attorney Deborah Thrope told City Lab. "You're going to have to wait even longer, because the housing authority has ceased issuing new vouchers."

The Center for Budget and Policy Priorities reports that only one out of four families who need rental assistance are currently able to get it. That problem is only going to get worse.

Nearly 4.9 million families receive rental assistance today. It lifts nearly two-thirds of them out of poverty and keeps many families with children from becoming homeless. These are the people who, in the words of Trump's budget proposal, would be asked to "shoulder more of their housing cost."

The average income of the families who would "shoulder" this added burden is $13,033 per year, as reported by the National Low Income Housing Coalition. 75 percent of housing voucher benefits must go to "extremely poor households."

Luxury spending is typical of the Trump administration, as Helaine Olen notes, redflecting a lack of empathy that is, unfortunately, all too common among ultra-wealthy individuals like those in Trump's cosseted crew.

Related Topic(s): Ben Carson; Cruelty; Indifference; Poverty, Add Tags
Add to My Group(s)
Go To Commenting
The views expressed herein are the sole responsibility of the author and do not necessarily reflect those of this website or its editors.