Click Here to Remove All Ads
A top GOP presidential contender has embraced the dark, paranoid, and crazy worldview of a far-right pseudohistorian. 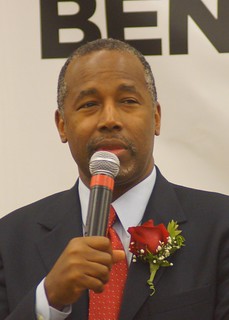 Ben Carson, the retired neurosurgeon and political novice near the top of the GOP presidential polls, does not spend much time and energy promoting specific policy stances. He has soared to a statistical tie with Donald Trump by emphasizing his outsider status and calling to revive America, deploying general right-wing rhetoric that resonates with social conservatives. At the recent Republican debate, he said, "The thing that is probably most important is having a brain." But he has provided one important clue as to his fundamental political worldview, by repeatedly endorsing a far-right conspiracy theorist named W. Cleon Skousen, who was characterized in 2007 by the conservative National Review as an "all-around nutjob." Skousen came to prominence in the 1950s as a virulent anti-Communist crusader; he later claimed that a global cabal of bankers controlled the world from behind the scenes, and he once wrote a book that referred to the "blessings of slavery."

Carson swears by Skousen, who died in 2006. In a July 2014 interview, Carson contended that Marxist forces had been using liberals and the mainstream media to undermine the United States. His source: Skousen. "There is a book called The Naked Communist," he said. "It was written in 1958. Cleon Skousen lays out the whole agenda, including the importance of getting people into important positions in the mainstream media so they can help drive the agenda. Well, that's what's going on now." Four months later, while being interviewed by Megyn Kelly on Fox News, Carson denounced unnamed Marxists who were presently seeking to destroy American society: "There was a guy who was a former CIA agent by the name of Cleon Skousen who wrote a book in 1958 called T he Naked Communist, and it laid out the whole agenda. You would think by reading it that it was written last year -- showing what they're trying to do to American families, what they're trying to do to our Judeo-Christian faith, what they're doing to morality." (Skousen had been an FBI employee -- not a CIA officer -- and mainly engaged in administrative and clerical duties; later he was a professor at Brigham Young University and police chief of Salt Lake City.) And the most recent edition of this Skousen book boasts Carson's endorsement on the front cover: "The Naked Communist lays out the whole progressive plan. It is unbelievable how fast it has been achieved."

David Corn is  Mother Jones ' Washington bureau chief. For more of his stories,  click here . He's also  on  Twitter  and  Facebook .  RSS  |  TWITTER  David is (more...)
Related Topic(s): Far-right, Add Tags
Add to My Group(s)
Go To Commenting
The views expressed herein are the sole responsibility of the author and do not necessarily reflect those of this website or its editors.