BELT AND ROAD INITIATIVE (BRI), DONALD TRUMP AND THE FALSITY OF IMPERIALISM'S NARRATIVE: WHY BRI IS THE PERFECT OPPORTUNITY FOR CHINA TO NEUTRALIZE 500 YEARS OF THE WEST'S RACIST SUPERIORITY PARADIGM. 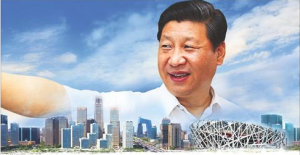 No one has seen the likes of a cartoon demagogue, like Donald Trump in such a high seat of power on the world stage. Whether he was an electoral goof-up by the deep state or their man to create the chaos they need to steal more of the world's wealth and possibly justify an eventual fascist coup d'e'tat, remains to be seen. But in the interim, communist-socialist China and its BRI loom large over the global horizon, ready to take center stage. How Baba Beijing responds may determine humanity's fate.

Background explanation before starting: I am deeply honored that this paper was recently published in a Chinese national institute's journal. They decided to publish a special edition focused on the Belt and Road Initiative (BRI). For two years, they have been collecting articles. Another journalist and I were the only two foreigners having the honor of being included in the collection. Herewith is the original English article. Looking back when I wrote it two years ago, it is very historically relevant. At the time, Donald Trump had been in the White House for less than a year and everything I predicted about the West's response to BRI has come true.

Author's note: as this paper is being submitted, the CPC's successful 19th Party Congress has just concluded. Its "New Era of Chinese Socialism" and 21st century vision for humanity will be taken as a public declaration of world war by Western empire's deep state, and it will respond accordingly. Therefore, to use two popular English terms, yes, the following proposals are "out of the box" (original) and "off the wall" (counterintuitive), but they are now more relevant and urgent than ever before, not only for BRI, but for the sake of the whole planet.

I am honored that your institute has invited me to write an article about China's Belt and Road Initiative (BRI), a history changing, visionary blueprint launched by Chinese President Xi Jinping in 2013. It includes two parts. First is the overland Silk Road Economic Belt (SREB), largely covering the Eurasian continent and on into Africa. The SREB harks back to the ancient Silk Roads that linked China to the rest of Eurasia. The other half of BRI is the 21st Century Maritime Silk Road (MSR), which also connects to China's past, this time, to seafaring exploration and trade going back thousands of years.

While certainly a coincidence, the timing of establishing BRI and ongoing events being determined around the world by the West, are especially intriguing. After more than 500 year of ongoing colonial supremacy, there is no question that the arc of development of Western empire has entered into its decline phase. There are two books that explain this quite well and are both highly recommended reading. The Collapse of Complex Societies, by Joseph Tainter (http://www.wtf.tw/ref/tainter.pdf) and Collapse - How Societies Choose to Fail, by Jared Diamond (http://cpor.org/ce/Diamond(2005)Collapse-HowSocietiesChooseFailureSuccess.pdf). These books have intriguing hypotheses as to why all societies, over the long term, eventually fall.

This is something China's millennial history has experienced no fewer than six times, including most recently 1911, with the collapse of the Qing Dynasty. However, neither book considers Marxist-Leninist dialectics, which explain that every capitalist society is doomed to collapse by an ever upward spiraling concentration of wealth into fewer and fewer hands, with concomitant socioeconomic cannibalism, perpetual war in search of resources, and fascism to control the increasingly impoverished masses. Thus, by analyzing the hypotheses of Tainter and Diamond, and synthesizing theirs with Marxist-Leninist Theory, we can safely say that capitalist Western empire's eventual collapse will be like no other in human history, given its systemic extremes and global reach on every continent.

Do I want to be alive when it happens? For the sake of schadenfreude, yes. However, when it does arrive, the survival of the human race may be severely challenged or even extinguished, due to a final paroxysm of nuclear war, with the West and Israel hoping to cling to its colonial system of tyranny, exploitation and extraction.

It may seem that I digress from the topic of BRI, but not really. Western imperialism is doing in spades what it does best against every country on Earth that is not a client state: economic extortion, geopolitical aggression, varying degrees of cold and hot war, as well as relentless, clandestine sabotage. This of course includes China. But more critically, any country that agrees to cooperate within BRI framework is, by imperial definition, an enemy of empire. The United States is supreme sovereign of Western empire. As they join BRI blueprint, America's supposed allies (in reality client states), will be considered enemies within its own ranks. This includes most of Western Europe and the Middle Eastern states that are aligned in America's global satrap hierarchy. The potential risk for these BRI partners to be on the receiving end of ever greater Western extortion and violence cannot be lost on China's leadership.

Related Topic(s): China New Silk Roads; China Politics, Add Tags
Add to My Group(s)
Go To Commenting
The views expressed herein are the sole responsibility of the author and do not necessarily reflect those of this website or its editors.