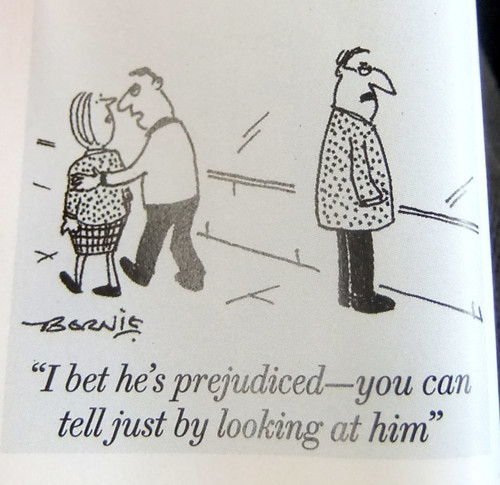 In 1943, Thomas Watson, then president of IBM had this to say: "I think there is a world market for maybe five computers." Of course, having hindsight is a wonderful gift so we can see the fallacy of his assessment today. But how many times have you said something with equal conviction and been just as wrong? I lost count of mine several years ago.

We can't do anything to completely eliminate the cognitive biases that both help and hinder us. There are hundreds of them, and a quick Google search will turn up plenty for a rainy day's contemplation.

But for today this article is about just one of those biases, "projecting our current mindset into the past and future." For sure, in some instances, it demonstrates conviction and serves as an asset. The efficacy of personal belief has been proven by some of the greatest minds in science and philosophy. In other instances, it's regarded as intransigence, a stubborn refusal to acknowledge anyone else's reality.

An Anatomy of Cognitive Bias

The first step of positive change is self-awareness, so let's take a closer look. It might help lessen the damage we often do to ourselves with these biases.

Three attributes of this particular cognitive bias come to mind:

1. There is nothing so limiting to discovery as a sincere ignorance believed to be the result of a rigorous investigation.

The first question is how do you know what you think you know? Is it based on rigorous investigation? Probably not. Like most of us, you are sincere about your beliefs but don't always come by them through diligent investigation. For instance, how many of us really investigate each political candidate when we vote? How many do a deep historical or theological analysis of their religious beliefs before we subscribe to them? How many of us do what Malcolm Gladwell called thin-slicing, i.e., making gut-level decisions on very little factual information?

2. The life of the mind depends on presuppositions.

The second question is, is your thinking based on presuppositions? Yes, always! All thinking is based on previous interpretations of our perceptions. These presuppositions are a shorthand method for negotiating everyday life. We've already established that no one has enough time to investigate every bit of information we believe to be true. So, what we already believe is always striving to be recognized and validated.

3. Nietzsche wrote "all things are subject to interpretation. Whichever interpretation prevails at a given time is a function of power, not the truth."

The third question is, is it your interpretation? Probably not. See Nietzsche's comment above. We subconsciously give over our power of interpretation as children long before we're even aware of it. That power is our culture. And as we are enculturated, we automatically bend to unconscious mechanisms for reinforcing those interpretations. They're called norms and become most apparent when we trip over one by not conforming.

The takeaway here is that we can stop ourselves from automatically believing everything we think. It starts with knowing the three traps identified above. The next step is to listen deeply to our internal narrative and recognize that it isn't you doing the talking. The final step is to distinguish that you are the one doing the listening to the continual narrative that contains the biases.

Related Topic(s): Consciousness; Culture; Fallacy; Perception; Philosophy; Power; Reality; Self; Self; Thinking, Add Tags
Add to My Group(s)
Go To Commenting
The views expressed herein are the sole responsibility of the author and do not necessarily reflect those of this website or its editors.