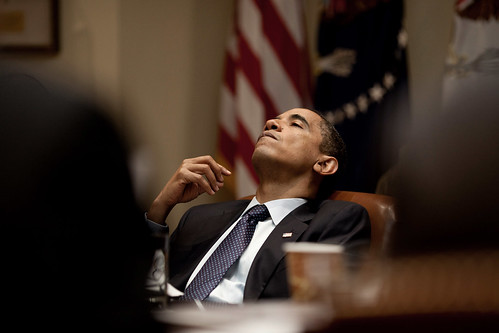 I just listened to Obama give Washington's account of the situation with ISIL in Iraq and Syria.

In Obama's account, Washington is defeating ISIL in Iraq, but Russia and Assad are defeating the Syrian people in Syria. Obama denounced Russia and the Syrian government -- but not ISIL -- as barbaric. The message was clear: Washington still intends to overthrow Assad and turn Syria into another Libya and another Iraq, formerly stable and prosperous countries where war now rages continually.

It sickens me to hear the President of the United States lie and construct a false reality, so I turned off the broadcast. I believe it was a press conference, and I am confident that no meaningful questions were asked.

If Helen Thomas were still there, she would ask the Liar-in-Chief what went wrong with Washington's policy in Iraq. We were promised that a low-cost "cakewalk" war of three or six weeks duration would bring "freedom and democracy" to Iraq. Why is it that 13 years later Iraq is a hellhole of war and destruction?

What happened to the "freedom and democracy?" And the "Cakewalk"?

You can bet your life that no presstitute asked Obama this question.

No one asked the Liar-in-Chief why Washington sent ISIL to Syria and Iraq in the first place, or why the Syrians and Russians keep finding US weapons in ISIL's military depots, or why Washington's allies were funding ISIL by purchasing the oil ISIL is stealing from Iraq.

It seems to be the case that ISIL originated in the mercenaries that Washington organized to overthrow Gaddafi in Libya and were sent to Syria to overthrow Assad when the UK Parliament refused to participate in Washington's invasion of Syria and the Russians put a stop to it.

All of the violence in the Middle East, violence that has consumed countless lives and produced millions of war refugees now overrunning Washington's NATO vassals in Europe, is 100 percent the fault of Washington, not the fault of ISIL, or Assad, or Russia. Washington and only Washington is to blame.

Washington produced this violence. Where is the question: "Why, Mr. President, did Washington introduce 15 years of massive and ongoing violence into the Middle East and then expect us to believe that it was the fault of someone else?"

If Helen Thomas were there, she would ask the relevant questions. But the pussies that comprise the American press corps are merely an audience that validates the false reality spun by Washington by accepting it without question.

Meanwhile, Moscow and Beijing have understood the message. Washington intends war. The purpose of Washington's lies is to prepare the insouciant Western peoples for war against the two countries that Washington cannot subjugate except by victory in war.

By faithful vassalage to Washington, Europe is bringing death and destruction to the world.

Related Topic(s): Bashar Al-assad; Isil; Syria; Violence, Add Tags
Add to My Group(s)
Go To Commenting
The views expressed herein are the sole responsibility of the author and do not necessarily reflect those of this website or its editors.