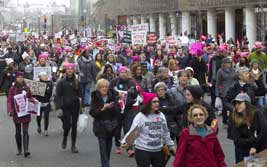 If you were born after the 1990s, ask your parents about Playboy magazine. It is hard for younger generations to believe but in the 60's, 70's and even 80's, a dirty old man in a bathrobe with a pipe--Hugh Hefner--largely dictated the sexual behavior and treatment of women.

Playboy "clubs" across the nation featured waitresses donning a white tail, bunny ears and corset (for curves) to serve male customers. When they brought food they were required to perform a back-arched, knees-bent "Bunny Dip" to excite the men. The Playboy Club job manual said, "Always remember, your proudest possession is your Bunny tail. You must make sure it is white and fluffy."

While we all know Bill Cosby's Playboy Club roots, the film showcases other celebrities praising Playboy who may shock viewers such Dick Cavett, David Steinberg Alex Haley, Robert Culp, Tony Curtis, Kiss' Gene Simmons and James Caan. Even the late Rev. Malcolm Boyd, author of Are Your Running With Me Jesus, appears in the movie apparently also okay with a philosophy that deems half the world worthy of wearing bunny tails.

The film barely touches on the murder of playmate Dorothy Stratten in 1980 by her partner and the suicide of bunny Bobbie Arnstein because of a drug scandal in 1975.

Like female lawyers defending Bill Cosby and Harvey Weinstein, it was no doubt hoped that a female Playboy CEO, Hefner's daughter Christie Hefner, would show it wasn't sexist. Serving as CEO from 1988 through 2008, Christie Hefner told the Daily Telegraph as a "feminist" she would not take the magazine hardcore. Dad overruled her and bought X-rated television stations in 2001.

In fact Christie may have been the ultimate casualty of the early #Metoo philosophy called Playboy. Not pretty enough to be in the magazine and not male enough for power, dad "transferred future control of Playboy Enterprises to his two young sons" reported the New York Times in 2002--not to Christie, despite her decades of service.

Related Topic(s): #metoo; #metoo; Female; Hefner; Men; Philosophy; Playboy Magazine; Suicide; Women, Add Tags
Add to My Group(s)
Go To Commenting
The views expressed herein are the sole responsibility of the author and do not necessarily reflect those of this website or its editors.