- Cindy Jacobs thinks Japan's tragedy was warranted because it's shaped like a dragon.

- Rick Joyner thinks that demonic forces have been unleashed by Japan's downfall.

- Chuck Pierce simply says: "I told you so!" 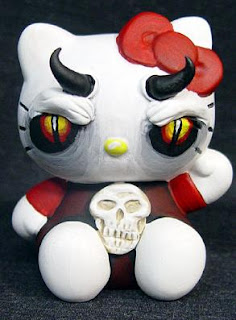 I can't accuse Cindy Jacobs, Rick Joyner or Chuck Pierce (all prophets) of being what I call "God's Ambulance Chasers" simply because while insulting Japan during its recent tragedies they did not ask for donations of any kind in relief for Japan. They didn't rain Bibles upon the beleaguered country either. Instead, they cut right to the core of the matter and insulted Japan directly and without mercy by ... gloating.

They gloated about Japan not heeding warnings for its evil ways, its idolatry, its demonic Hello Kitty* They said that Japan's atheism, Buddhism, Confucianism and Shintoism, brought about the events in Japan just as surely as if Japan had directly asked for them from God.

I have personally felt that one of the reasons Japan was such a hard group for the gospel was the fact that they have had a direct link with the Imperial family and a direct link with the sun goddess, Amaterasu... this link with Amaterasu and sun worship was reinstated in a ceremony in which the new Emperor once again participated and "spent the night with the goddess" after eating the sacred rice.

On the other hand, if you look at it another way, this island, Hokkaido, looks like the head of a dragon with the body being the rest of Japan. The people of Asia have worshipped the dragon for 5,000 years.

This from a woman who sees herself as a latter-day Oracle of Delphi, babbling in "tongues" she can't interpret (and hopes no on else can either).

What Jacobs doesn't seem to comprehend is that the Emperor of Japan's role in government is strictly symbolic and that the dragon symbolizes many things in Asia but has seldom been actually "worshiped."

Chuck Pierce went to Japan to put the fear of God into them in 2005 and God told him that Japan would be shaken and brought to its knees because it was a "stronghold of spiritism"** Nobody told Pierce that spiritism died out in Japan about 1920 although it was more plausible than, say, the church that Tom Cruise belongs to.

Rick Joyner stated that the earthquake and tsunami will eventually unleash demonic Nazism in America, because in order to shore up its collapsed economy, Japan will call in America's debt and ruin America, catapulting the country into the talons of evil.

Joyner's visions (he once met with Jesus and the saints - although he couldn't tell which ones) have entertained people for years. He has not met with approval in Japan, however.

Rev. Dan Vojir is has been writing/blogging on religion and politics for the better part of ten years. A former radio talk show host (Strictly Books " Talk America Radio Network) and book publisher, Dan has connected with some of the most (more...)
Related Topic(s): Atheism; Bible-thumping; Buddhism; Chuck Pierce; Cindy Jacobs; Confucianism; Disasters; Gods Ambulance Chasers; Insults; Intolerance; (more...) Japan; Rick Joyner; Tamtampam; Trolls, Add Tags  (less...)
Add to My Group(s)
Go To Commenting
The views expressed herein are the sole responsibility of the author and do not necessarily reflect those of this website or its editors.