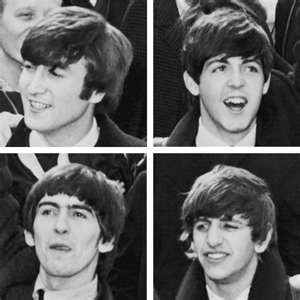 "Late one night, not very long ago, I had a dream that the Beatles were still among us, making us laugh and sing in the same way they did when they were the undisputed Princes of the Planet Earth all those years ago. That's what was so wonderful about the Fab Four: they not only sang like the scruffy angels they were, but they were so damned funny! All one has to do is view the films "A Hard Day's Night" and "Help" and you're once again reminded that they were a great comedy team - one of the greatest. When I awoke from that dream - thinking it had been real - the blunt realization that the Beatles are gone forever was too depressing to even contemplate."

(Image by Unknown Owner)   Details   DMCA
Brian Sager is the son of my friends Brian and Terri Colgan Sager. That's a photograph of him on the left. On the day that he was born in 1994, the Beatles had not made a record in almost a quarter of a century. John Lennon had been dead for thirteen- and-a-half years. And yet that time divide was not about to stop him from joining me at the 2012 Fest for the Beatles which is taking place this weekend at the Crowne Plaza Meadowland Hotel in Secaucus, New Jersey. In fact what struck me about this event m ore than anything else were the number of kids Brian's age - and even younger - who were taking part in the festivities.

Think about it. That would be the equivalent of several hundred teenagers in 1969 getting together to celebrate the legacy of the Paul Whiteman Orchestra - the hottest and best selling recording act of 1926. Although I have no documentation to prove this one way or another, I'm going to go out on a limb here and say I don't think that ever happened. Call it a silly hunch on my part.

On a warm July day in 1957, fate would instigate the meeting of two teenage boys at a Church picnic in Liverpool, England. Each would discover that the other shared a mutual passion for American rock 'n' roll music. The older boy, impressed with the younger one's musicianship, asked him if he would like to join his little skiffle group which was called the Quarrymen . The younger lad agreed. Fifty-five years later and across the ocean, a couple of thousand strangers would come together to celebrate the legacy of that chance encounter between John Lennon and Paul McCartney five-and-a-half decades ago.

The Beatles are a topic I could go on all night about. The quote at the top of this piece I wrote n early five years ago on the fortieth anniversary of the release of the Sgt Pepper's Lonely Hearts Club Band LP. At the time there was a peculiar trend in cultural revisionism that was implying that this classic recording had never really been that good to begin with. I quoted one writer who even had the chutzpa say that most of the tunes on it "are pretty bad". One of the "pretty bad" songs he sited as an example was the brilliant collage of psychedelia and circus music, Being for the Benefit of Mr. Kite . That was enough for me to spring to the defense of that album. Sgt. Pep per is a masterpiece. I was reminded yet again of its timeless relevance yesterday as we walked through the many exhibits at Beatlefest 2012. At one point we could hear the haunting voice of John Lennon echoing through the halls, singing A Day in the Life . He is a ghost that refuses to go away, reaching out to us from beyond that unknowable void.

I attended my first Beatles convention with my brother Pete in September of 1975. It was held at the old Commodore  Hilton in New York City, a place which doesn't even exist anymore. I was the same age that Bria n Sager is now. He would not be born for another nineteen years. Gerald Ford was living in the White House. George Harrison and John Lennon were still alive. "All those years ago" as George's song laments. It was a different world then. I was a different person. You were, too, I'm sure. Everything has changed. Everything.

The featured guest speaker at that convention was good old Mal Evans (photo left) - the Beatles insider and jack-of-all- trades; a man who would do, could do ( and did do ) anything and everything for the Fabulous Fabs - including bringing in talent for their record label Apple . The group Badfinger was Mal's discovery. Pete and I spent some time chatting with him and he was as sweet and gentle as his legend suggests. Do you remember that scene from the film Help , where the ice explodes and a channel swimmer emerges fro m within asking Lennon for directions to the White Cliffs of Dover? That was Mal! It is the most hilarious scene in that ultra-hilarious movie. But as funny as that moment is, it has been forever ruined for me by hindsight. I watch it now and cannot help but think of the horrible fates that awaited both Mal Evans and John Lennon.

Four months after we met him, Mal would descend into a psychological storm from which he never emerged. Severely depressed and in despair. he barricaded himself inside a Los Angeles hotel room with a gun. Over the telephone, he told his girlfriend that he was going to kill himself. The LA cops saved him the trouble. They burst into the room and fired several shots into his body, killing him instantly. They could have tried to save him. They didn't. You've gotta hand it to the LAPD. You really do .

One of the coolest things about attending any Beatlefest is the vibe . For the most part, fans of the Beatles tend to be really nice people. I think I'm a fairly nice guy. Brian Sager is most definitely a very nice guy - but that doesn't really count, come to think about it. He comes from an extended clan of very nice people on both his mom's and his dad's side; but other than his two siblings (Hello, Meghan! Hello, Michael!) none of them are huge fans of the lads from Liverpool to the best of my knowledge. Niceness just sort of runs in that family. It has little to do with his being a fan of the Beatles I'm sure.

But walking through the exhibits which took up two floors of the Crowne Plaza, you get this indescribable sense of serenity and kindness emanating from the people attending. This could be renamed "The Convention of Niceness" and I don't think anyone would complain all that much. Total strange rs smile, laugh and sing with one another. All around us there was a feeling of (Dare I say it?) LOVE - a s in "All you need is...." These folks really believe it. I do, too. It has been like that at every Beatlefest I have attended down through the years - and I have attended so many of them that I lost count of the number a long time ago.

Follow her down to a bridge by a fountain,
Where rocking horse people eat marshmallow pies
Everyone smiles as you drift past the flowers,
That grow so incredibly high....

-John Lennon
From Lucy in the Sky with Diamonds

What made John, Paul, George and Ringo so special (to my mind at least) was that they tried to appeal to the better angels of our nature. I once said that if I could boil down the essence of the Beatles' message into one sentence it would be this: We are the makers of our own dreams. The "culturally correct" hindsight of 2012 dismisses the Sgt. Pepper record as childish, ponderous and naive - but is it really? We've become so crude and obscene as a culture in the forty-five years since it was released, some of us now view t he images of "tangerine trees and marmalade skies" from Lucy in the Sky through a cracked prism of cynicism and scorn - but whose fault is that??? The fault, dear Brutus, lies not with the Beatles, but with ourselves. That piece I wrote five years ago was called Why the Beatles Still Matter . Here's another paragraph from it:

" In 1995, the night the video Free As a Bird premiered on national television (the first 'new' Beatles song in over a quarter of a century), I watched it with a young woman who was born in 1970, the year they broke up. Hearing them sing together again - Paul and George sounding strong and clear; John, by that time long dead, his voice transferred from an old and faded cassette tape, sounding as if he were singing from far, far away - was a very moving experience. When she noticed my reaction, she laughed and said, 'Oh, Tom! What's the big deal?' I told her that no one who didn't live through that turbulent era, could possibly understand what that band meant to their troubled generation."

I was dead wrong when I wrote those words half a decade ago. You don't need to have been part of their generation in order to "get" the Beatles. There are untold millions of young people to day who appreciate them. Brian Sager certainly does. Incredibly, a band that made their last recording forty-three years ago - two of whose members are no longer living - was the best selling group for the first decade of the twenty-first century. And it's not just the baby boomers who are buying up all of those CD's. The reason the recording industry has been on the decline in recent years has nothing to do with downloading - and everything to do with quality . There is good music being made these days but it is not part of the main stream and is, in fact, labeled "alternative". Quality is seriously lacking in 2012. The Beatles were a quality act. Case closed.

Tom Degan is a former Green Party candidate for New York State Senate. He writes on a blogsite called, The Rant by Tom Degan. He is the recipient of the Presidential Medal of Freedom.....Okay, he didn't really receive the Presidential Medal of (more...)
Related Topic(s): Beatles; Lennon, Add Tags
Add to My Group(s)
Go To Commenting
The views expressed herein are the sole responsibility of the author and do not necessarily reflect those of this website or its editors.