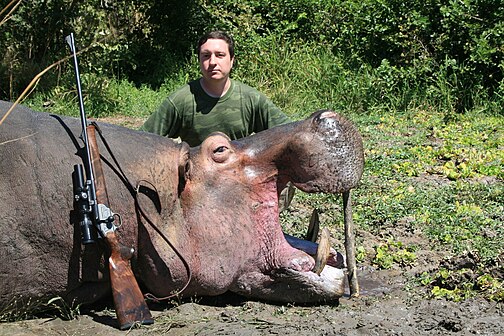 (Compiled from articles in Entertainment Weekly, The Reno Nevada Gazette, and Daily Kos)

Brian is the founding member of the Beach Boys; he made emphatically clear that he opposed the group's performance in Reno at a Safari Club International convention which advocates for "the right to hunt" and endorsed "trophy hunting," the killing of endangered species and other animals for sport. On several social media sites, Wilson spoke highly of the Change.org petition asking Beach Boys manager Elliott Lott to cancel the performance. As of this writing, the petition has accrued more than 100,000 signatures.

"This organization supports trophy hunting, which both Al [Jardine] and I are emphatically opposed to," Wilson wrote on Facebook and Twitter. "There's nothing we can do personally to stop the show, so please join us in signing the petition."

""Wouldn't it be nice if all the Beach Boys, Stayed away from those who kill for fun?" the petition reads, pledging that signers will stop buying the band's music, merchandise, and concert tickets "until the Beach Boys withdraw from the SCI Convention and publicly state their opposition to this sick 'sport' of killing animals for 'fun'." "

The Change.org petition reads, in part, "The Safari Club International convention is the world's biggest wildlife killing market a staggering 870 companies will be selling trophy hunting holidays and wildlife body parts including animal heads this year. " The Campaign to Ban Trophy Hunting predicts that US hunters will shoot an estimated 20,000 animals from protected species this year.

Daily Kos put it rather well:

"It's hard to imagine what kind of person enjoys killing beautiful, intelligent, majestic wild animals for giggles, and then I look at Donald Trump Jr.'s face and am instantly reminded. And to pose with the animal you just killed while flashing a stupid silver-spoon grin? Let me block off an entire weekend on my Google calendar to do nothing but dry heave. Thanks, Brian Wilson, for standing up for the innocent. If only everyone showed the same humanity and decency.

Mike Love, another Beach Boys founding member and the group's current lead singer, objected to Wilson's criticisms: "We look forward to a night of great music in Reno, and, as always, support freedom of thought and expression as a fundamental tenet of our rights as Americans," Love said. [What a crock of bullshit, as if American Freedoms had anything to do with the slaughter of beautiful sometimes endangered animals!]

The SCI convention is scheduled for Feb. 5-8, with Trump Jr. planning to give a speech there; he is an avid hunter, and has repeatedlytaken photos posing with kills. A hunting trip with Trump in Alaska will also be auctioned off at the convention, along with other big game hunts and such items as chandeliers made from deer antlers.

[In an online post responding to Humane Society allegations, convention organizers said despite a Nevada law prohibiting trade in shark fin, lion, elephant, rhinoceros, tiger, leopard, cheetah, jaguar, pangolin, sea turtle, ray, mammoth, narwhal, walrus or hippopotamus, vendors and others at the convention were covered by a federal regulation that specifically authorizes the sale of elephant products other than ivory and sport-hunted trophies.]

Wilson co-founded the band with his brothers Dennis and Carl, as well as Mike Love and Al Jardine, is now bashing their performing at Convention, where Donald Trump Jr. will be the keynote speaker. Love owns the rights to the touring edition of the Beach Boys.

This organization supports trophy hunting, which Both Al and I are emphatically opposed to. There's nothing we can do personally to stop the show, so please join us in signing the petition at https://www. change.org/p/beach-boys-s top-supporting-trophy-hunting " Most trophy hunts are sold at these conventions.


The petition by Eduardo Goncalves of the Campaign to Ban Trophy Hunting features a photo of Trump Jr. and brother Eric Trump holding a dead leopard.

In the post, Wilson said he and Al Jardine, Beach Boys co-founder, guitarist and singer, oppose the decision by band co-founder and singer Mike Love to play at the convention.

"We the undersigned pledge to stop buying or downloading all Beach Boys music, going to Beach Boys concerts, and purchasing any Beach Boys merchandise until the Beach Boys withdraw from the SCI Convention and publicly state their opposition to this sick 'sport' of killing animals for 'fun,'" the petition states, in part.

Wilson's publicist, Jean Sievers, said Wilson only found out about the Safari Club gig and petition on Saturday, but that his love for animals is lifelong.

Related Topic(s): Africa Safari Trophy Hunting; Donald Trump Jr Trophy Slaughter Of Innocent Anima, Add Tags
Add to My Group(s)
Go To Commenting
The views expressed herein are the sole responsibility of the author and do not necessarily reflect those of this website or its editors.