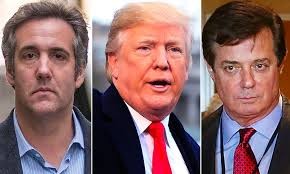 So, Paul Manafort, described by the New York Times as "a longtime lobbyist and political consultant who worked for multiple Republican candidates and presidents," was convicted of bank fraud, tax fraud and failure to report a foreign bank account. And Michael Cohen, Donald Trump's former personal lawyer, pled guilty to tax evasion, bank fraud (making false statements to obtain loans), and breaking campaign-finance laws by paying off two women who claimed to have had sexual affairs with Trump. Because Cohen says those payoffs were made at Trump's direction, that is the one charge that directly implicates Trump.

On the basis of the these results, the NYT editorial board insists: "Only a complete fantasist ... could continue to claim that this investigation of foreign subversion of an American election, which has already yielded dozens of other indictments and several guilty pleas, is a 'hoax' or 'scam' or 'rigged witch hunt.'" Democrats concur, saying the results "put the lie to Mr. Trump's argument that Mr. Mueller was engaged in a political investigation."

But these crimes are tax fraud, money laundering, and credit-app padding that have nothing to do with Donald Trump, and campaign-finance violations related to what a critic of Trump aptly describes as "a classic B-team type of bumbling screw-up of covering up mistresses." I question the level of word play, if not fantasizing, necessary to claim that these crimes validate "this investigation of foreign subversion." None of them has anything to do with that. The perils of this, that, these, and those.

Do these results disprove that the Mueller probe is "a political investigation"? I think they imply quite the opposite, and quite obviously so.

Why? Because these convictions would not have occurred if Hillary Clinton had been elected president. There would be no convictions because there would have been no investigation.

If Hillary had been elected, all the crimes of Manafort and Cohen--certainly those that took place over many years before the election, but even, I think, those having to do with campaign contributions and mistress cover-ups--would never have been investigated, because all would have been considered right with the political world.

The Manafort and Cohen crimes would have been ignored as the standard tactics of the elite financial grifting--as well as of parasitism on, and payoffs by, political campaigns--that they are. Indeed, there would have been no emergency, save-our-democracy-from-Russian-collaboration, Special Counsel investigation, from which these irrelevant charges were spun off, at all.

The kinds of antics Manafort and Cohen have been prosecuted for went unnoticed when Donald Trump was a donor to the Democratic and Republican parties, and if he had stayed in his Tower doling out campaign contributions, they still would be. It's only because he foolishly won the presidency against the wishes of the dominant sectors of the ruling class that those antics became the target of prosecutorial investigation. Lesson to Donald: Be careful what you wish for.

If Trump weren't such an idiot, he probably would have realized that this is what happens when you run for president without prior authorization from the ruling classes, and win. #ManafortTrial #MichaelCohen #Trump pic.twitter.com/tyrpuLHRNT

What the NYT calls "a culture of graft as well as corruption" that "suffused" the Trump campaign is part and parcel of a culture of politico-capitalist corruption that suffuses American electoral politics in general. Manafort, who has indeed been "a longtime lobbyist and political consultant," is only one in a long, bipartisan line that "enrich [themselves] by working for some of the world's most notorious thugs and autocrats."

Have you heard of the Podestas? The Clinton Foundation? Besides, the economic purpose of American electoral politics is to funnel millions to consultants and the media. Campaign-finance law violations? We'll see how the lawsuit over $84 million worth of funds allegedly transferred illegally from state party contributions to the Clinton campaign works out. Does the media report, does anybody know or care, about it? Will anybody ever go to prison over it?

The Republicans and Democrats would just as soon leave this entire culture of graft and corruption undisturbed by the prosecutorial apparatus of the state. That kind of thing can get out of hand. Only because the election of Donald Trump was a mistake from the establishment point of view has that apparatus been sicced on him. The frantic search, anywhere and everywhere, for some legal charges that can stick to Trump is driven by a burning desire to get something on Donald Trump that will fatally wound him politically, and serve as "objective" grounds for impeachment or resignation.

Related Topic(s): Donald Trump; Impeachment; Michael Cohen; Mueller Investigation; Paul Manafort; Russiagate; Trump Presidency; Trump Scandal, Add Tags
Add to My Group(s)
Go To Commenting
The views expressed herein are the sole responsibility of the author and do not necessarily reflect those of this website or its editors.