But, Bayer intends to re-write history 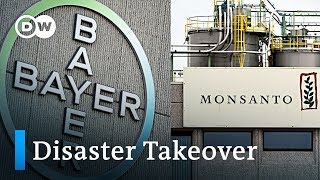 As most of you know, Bayer now owns Monsanto. To make it happen, it forked out $66 billion in 2018. Among the new parent's problems? Lawsuits against Monsanto's best-selling herbicide, Roundup.

Catch this, from fiercepharma.com: "Recently, in a key bellwether trial, a U.S. federal jury in San Francisco found Bayer liable for plaintiff Edwin Hardeman's non-Hodgkin lymphoma [caused by Monsanto's Roundup] and awarded him $80 million in damages. Bayer said it plans to appeal, as it is doing with a [similar] California state suit that awarded the plaintiff $78 million. Still, there are more than 11,200 other similar suits [against Roundup], according to Bayer's last tally."

Therefore, key Bayer shareholders are angry at Bayer's board for green-lighting the 2018 buyout of Monsanto. Bayer intends to eradicate the name "Monsanto," and do business under a fully merged single name, its own. But for now, that hasn't stopped the flood of lawsuits against Bayer aimed at its adopted child, Monsanto/Roundup.

What about sales of Roundup? As early as 2016, for several reasons, a sharp decline had already set in. One reason: in 2015, the World Health Organization had declared glyphosate, the prime ingredient in Roundup "a probably carcinogen." Monsanto moved to cut 16% of its work force.

Bayer appears to be "taking one for the team." It certainly bought Monsanto knowing full well that Roundup was going to be a big problem. It knew Monsanto had garnered a horrendous reputation from one end of the planet to the other -- owing in part to Roundup, and also the disastrous pioneering of GMO crops. But big daddy Bayer didn't flinch. After all, it has territory to defend -- it's in the same basic business as Monsanto was: genetic manipulation. To protect and sanitize that Brave New World territory, long-term, Bayer aims to swallow Monsanto whole, no matter how much penalty-money that costs, thus making Monsanto disappear for future generations.

"Monsanto? Oh yes. Wasn't that some kind of farming company? Or a music group?"

That's the game here. A handful of giant biotech companies (and their shadowy backers) intend to OWN the future, via various forms of radical gene-alteration, in plants, animals, and humans. They want nothing to hinder that agenda. Monsanto was a stain. It brought down heavy attacks on the whole "genetic community." Therefore, it had to go. The only question was: who would come up with the huge buyout cash and make the sacrifice?

Once the core of the infamous Nazi cartel, IG Farben, Bayer had a history of re-writing history. Long term, it would know how to make Monsanto vanish, as if it had never existed.

That operation is now underway.

Related Topic(s): Health; Lawsuits; Manipulation; Monsanto Bayer Merger, Add Tags
Add to My Group(s)
Go To Commenting
The views expressed herein are the sole responsibility of the author and do not necessarily reflect those of this website or its editors.