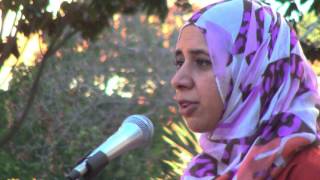 Zahra Billoo: .We all have an obligation..
(Image by YouTube, Channel: Peninsula Peace and Justice Center)   Details   DMCA

THE EXECUTIVE DIRECTOR of the San Francisco chapter of the Council on American-Islamic Relations, or CAIR, has had an award rescinded by an interfaith group after pro-Israel activists vehemently objected to the award due to her criticisms of the Israeli government and various pro-Israel groups.

Related Topic(s): Activist; Awards; Interfaith Speaker; Muslim; Zahra Billoo, Add Tags
Add to My Group(s)
Go To Commenting
The views expressed herein are the sole responsibility of the author and do not necessarily reflect those of this website or its editors.