Coming decade could see the US take on Russia, China and Iran over the New Silk Road connection. 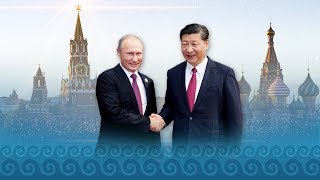 The Raging Twenties started with a bang with the targeted assassination of Iran's General Qasem Soleimani.

Yet a bigger bang awaits us throughout the decade: the myriad declinations of the New Great Game in Eurasia, which pits the US against Russia, China and Iran, the three major nodes of Eurasia integration.

Every game-changing act in geopolitics and geoeconomics in the coming decade will have to be analyzed in connection to this epic clash.

The Deep State and crucial sectors of the US ruling class are absolutely terrified that China is already outpacing the "indispensable nation" economically and that Russia has outpaced it militarily. The Pentagon officially designates the three Eurasian nodes as "threats."

Hybrid War techniques carrying inbuilt 24/7 demonization will proliferate with the aim of containing China's "threat," Russian "aggression" and Iran's "sponsorship of terrorism." The myth of the "free market" will continue to drown under the imposition of a barrage of illegal sanctions, euphemistically defined as new trade "rules."

Yet that will be hardly enough to derail the Russia-China strategic partnership. To unlock the deeper meaning of this partnership, we need to understand that Beijing defines it as rolling towards a "new era." That implies strategic long-term planning with the key date being 2049, the centennial of New China.

The horizon for the multiple projects of the Belt and Road Initiative as in the China-driven New Silk Roads is indeed the 2040s, when Beijing expects to have fully woven a new, multipolar paradigm of sovereign nations/partners across Eurasia and beyond, all connected by an interlocking maze of belts and roads.

The Russian project Greater Eurasia somewhat mirrors Belt & Road and will be integrated with it. Belt & Road, the Eurasia Economic Union, the Shanghai Cooperation Organization and the Asia Infrastructure Investment Bank are all converging towards the same vision.

So this "new era," as defined by the Chinese, relies heavily on close Russia-China coordination, in every sector. Made in China 2025 is encompassing a series of techno/scientific breakthroughs. At the same time, Russia has established itself as an unparalleled technological resource for weapons and systems that the Chinese still cannot match.

Russia is showing China how the West respects realpolitik power in any form, and Beijing is finally starting to use theirs. The result is that after five centuries of Western domination which, incidentally, led to the decline of the Ancient Silk Roads the Heartland is back, with a bang, asserting its preeminence.

On a personal note, my travels these past two years, from West Asia to Central Asia, and my conversations these past two months with analysts in Nur-Sultan, Moscow and Italy, have allowed me to get deeper into the intricacies of what sharp minds define as the Double Helix. We are all aware of the immense challenges ahead while barely managing to track the stunning re-emergence of the Heartland in real-time.

Related Topic(s): Agents; Eurasian Union; Iran; NATO; Russia-china, Add Tags
Add to My Group(s)
Go To Commenting
The views expressed herein are the sole responsibility of the author and do not necessarily reflect those of this website or its editors.