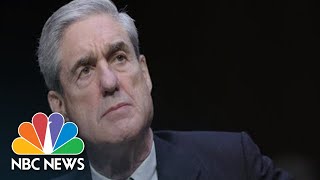 Neither the Congress nor the the American public has seen the report created by Special Counsel Robert Mueller, and at this point it's difficult to know how closely the summary document prepared by Attorney General William Barr reflects the contents of that report. But -- assuming Barr is not outright misrepresenting the contents of Mueller's conclusions, or spinning those results beyond recognition -- there's nothing to say except that statements coming on Sunday have been deeply, deeply disappointing.

No matter what information trickles out from this point, no matter what action other prosecutors may take, the nation has missed a singular opportunity to address a festering cancer. That opportunity will not return. And the manner of its dismissal, a letter that's already being heralded on the right as complete exoneration, no matter what the text says, is certain to empower even more undemocratic, disruptive, and simply ugly behavior.

Donald Trump got a pass. He will walk away from this not just free from consequence, but emboldened in the idea that he really is above and beyond any rules. And on the possible charge of obstruction, he got a very special intervention from Barr, who had advertised this part of the pass in his job application to be attorney general.

It's very hard to pretend that the summary as Barr has written is anything other than severely disappointing, as well as confusing. After all, we already knew that Russia had made extensive efforts to reach out to the Trump campaign, and those efforts were welcomed. From Donald Trump, Jr. eagerly inviting Russian operatives to stroll into campaign headquarters, to Paul Manafort ferrying polling data to a Russian agent, to George Papadopoulos working both ends of the campaign-Russia pipeline, there was never a moment where Donald Trump's campaign was anything other than enthusiastic and receptive about the idea of working with Russia.

And for the investigation to end in such a state seemingly leaves a thousand threats still unresolved. What about Erik Prince's meetings in the Seychelles? Why did Jeff Sessions hold a multi-hour private meeting with the Russian ambassador when no other Senator did the same? What about the dozens of connections that seemed to exist between the Bannon-created Cambridge Analytica and both Russian operatives and WikiLeaks?

And ... what about Michael Flynn? Flynn was caught red-handed engaging in, at the very least, illegal lobbying for a foreign government -- lobbying that including trying to arrange for the kidnapping and export of a U.S. resident in a way that would have certainly led to his death. For his cooperation, Flynn got all but a single charge of lying to investigators waved away. And from this cooperation came... what? What single word of Michael Flynn's can be found in all the actions taken by the Special Counsel? Why was he so rewarded for " nothing?

Where does this leave peripheral figures like GOP strategist Aaron Nevins? Nevins knowingly and enthusiastically conspired with Russian hackers to identify the most valuable documents in the haul stolen from the DNC. Nevins then helped both the Russians and Republican candidates to take advantage of the fact that they had insider knowledge of Democratic strategies for getting out the vote. For this, Nevins faces ... nothing?

This isn't the end. In fact, it's almost certain that the whole investigation of what happened with the Trump campaign and Russian intervention in the 2016 election is closer to its beginning than to its end. But there will be few, if any, opportunities in the future to conduct a comprehensive review of the facts in a way that can't be painted as partisan.

There are well-placed sources indicating that the actual report produced by Mueller is much more damaging for Trump. But when, or if, the public gets to see that report remains up in the air. In the meantime, Republicans will have the document prepared by Barr, which they can wave side by side with the report produced by Devin Nunes, while they chant ... No collusion! No collusion!

This was not unexpected. But that's the thing about disappointment; even when you know it's coming, it still hurts. And this is a big one.

Related Topic(s): Attorney General William Barr; Government; Mueller Investigation, Add Tags
Add to My Group(s)
Go To Commenting
The views expressed herein are the sole responsibility of the author and do not necessarily reflect those of this website or its editors.