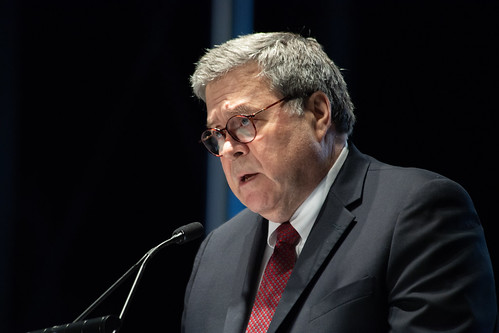 On Tuesday Barr poured cold water on President Donald Trump's allegations of voter fraud, announcing that the Justice Department had found no fraud "on a scale that could have effected a different outcome in the election." Of no less importance for the longer run, Barr seems to have abandoned the effort to hold top former Justice, FBI, and CIA officials (read National Security State) accountable for using their "Russia-gate" schemes to undermine Trump -- both as candidate and president.

The one-and-a-half-year investigation led by US Attorney for Connecticut John Durham appears dead in the water, floating next to the Trump ship, and sinking. Barring the unforeseen, what seems already clear is that the National Security State (aka, Deep State) will prevail yet again -- this time, big time. Thus, for the foreseeable future, it will have few compunctions about interfering on the Washington political scene to nudge important things in the direction it wants -- with not a thought to ever being held accountable. (For the record, Durham has charged only one person, an FBI lawyer who doctored an email relating to an application for a Foreign Intelligence Surveillance Act warrant.)

But wait, you say: the New York Times reports Click Here that Barr made an artful move in appointing Durham "Special Counsel," which the Times says "makes it more difficult for the Biden administration to fire him," and is "a move certain to please Mr. Trump." That may be, but only if the president continues to heed the legal insight of the likes of Rudy Giuliani.

Shrewd? Or Too Clever By Half

In reality, though, come Jan. 20, Durham will be handcuffed by President-elect Joe Biden's Attorney General. In fact, legal commentators are now arguing as to whether Durham's appointment as "special counsel" is legal. Let's just assume it squeaks through by some lawyerly legerdemain, despite the Justice regulation that a special counsel must come from outside the government.

Even so, former federal prosecutor Elizabeth de la Vega and other legal minds pronounce themselves underwhelmed at the "shrewdness" attributed to Barr. Click Here

Addressing Durham's ability to function independently in a Biden administration, de la Vega has written: "Barr hasn't pulled off any brilliant move. The Attorney General doesn't have to remove Durham. Durham will need approval from the AG for any significant steps. The AG will decide the propriety of proposed acts by applying the law to the facts."

On the appointing someone not outside the government issue, De la Vega joined others in pointing out that Barr's order was not "in accordance with" one of the major federal regulations governing the appointment of special counsels.

"...a special counsel must come from outside the government," she noted, before citing the language from Barr's letter to congressional leadership. "Barr appointed Durham 'with the powers and authority of a Special Counsel.'

The two have come a long way on the Russia-gate investigation. Initially as mean as a junkyard dog, they did not hesitate to openly criticize National Security State apologists when the evidence Durham accumulated indicated they should. For example, in Dec. 2019, when the Justice Department Inspector General found the FBI-mounted Russia-gate investigation "properly predicated," both Barr and Durham openly voiced strong disagreement.

By April of this year, with the Durham investigation already underway for a year, Attorney General Barr referred directly to the FBI's investigation into the Trump campaign and Russia and called it "one of the greatest travesties in American history."

Ray McGovern works with Tell the Word, the publishing arm of the ecumenical Church of the Saviour in inner-city Washington. He was an Army infantry/intelligence officer and then a CIA analyst for 27 years, and is now on the Steering Group of Veteran Intelligence Professionals for Sanity (VIPS). His (more...)
Related Topic(s): Attorney General William Barr; Investigation; Russia-gate; Trump, Add Tags
Add to My Group(s)
Go To Commenting
The views expressed herein are the sole responsibility of the author and do not necessarily reflect those of this website or its editors.