Israel says No. We will keep both, thank you very much. 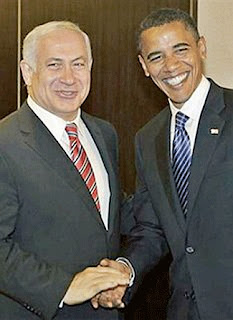 
When the Israeli Prime Minister lectured Obama he needs to be "aware of the reality on the ground" he wanted the American president to see "it" through Netanyahu's goggles. He has succeeded. Our president's double talk about 1967 borders could not get more confusing.
How is Mr. Obama helping peace when he injects massive ambiguity, with his statement "1967 should be the basis with mutually agreed land swaps"? The land-swap deal gives Israel ownership of homes and property stolen from 1948 expelled Palestinians "whose right of return" according to the president's proposal, Israel will swap, with land that it stole when it invaded the Jordanian West Bank in 1967.

In response, for once, Netanyahu spoke truthfully saying, "Palestinians will never be allowed to return; it will never happen." He will keep both, thank you very much -- the Nakba properties and the occupied territories -- which in Netanyahu's head, will make Israel inherently safe and infinitely defensible.
On Sunday the president went back to the original place of worship, AIPAC, to speak to pro-occupation Israelis, neocons and members of the U.S. Congress. He repeated the "mutually agreed upon" swaps with additional explanations, knowing full well even that "will never happen."
Just to make sure that the lobby was receptive to his own loyalty, Mr. Obama praised Eric Cantor and Steny Hoyer for doing "so much to sustain the bonds between the United States and Israel," which is curious since in November it was Cantor who, according to a story in Salon, pledged to "protect and defend Israeli interests against his own Government."

Carrying his impartiality and honest brokership across the Atlantic this week, Mr. Obama is working hard in Europe, for Israel, trying to convince leaders there to vote against Palestinian statehood in September.

This world will really be in trouble if the U.S president becomes any more impartial.

Related Topic(s): 1967 Borders; AIPAC; Barack Obama Speech; Land Grab; Obama Middle East Policy; Palestinian, Add Tags
Add to My Group(s)
Go To Commenting
The views expressed herein are the sole responsibility of the author and do not necessarily reflect those of this website or its editors.