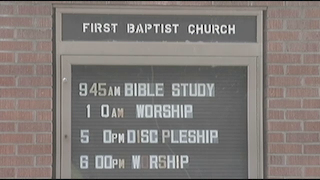 (Image by Unknown Owner)   Details   DMCA
Charles Wilson and his wife Teandrea were supposed to get married at the church they had been attending for awhile. Although they weren't official members of the First Baptist Church in Crystal Springs, the pastor, Dr. Stan Weatherford still agreed to officiate it for them. But as the date grew closer, the couple was hit with some shocking news from their pastor. "A small minority" of the predominately white congregation "voted" that no black couple would be married at their church.

Not only did they vote against the wedding, they told their pastor that they would vote him out if he officiated it as planned. So what did the good doctor do? Take a look.

Obviously afraid of his congregation, Dr. Weatherford decided to marry the couple at another location. What kind of pastor lets his congregation tell him what to do? They voted to ban the wedding. Wait a minute - there's no democracy in church. Not in any church I've ever been a part of.  The pastor   appoints   positions.  The pastor delegates tasks to people. Regular members are the flock. Since when does the flock have direction? What happened to the people representing mindless sheep? Then Weatherford gets on camera and makes excuses for the church.  This Dr. Weatherford is a coward, and if he's that afraid of his congregation, he needs to step down anyway.

The "congregation" said that their church is open to all races...just not open to weddings for all races, and they plan to have a meetings in the future just in case this happens again. Well let me be the first to say to the First Baptist Church of Crystal Springs that they won't have to worry about this type of thing happening ever again.
This post also appears at the Insane Asylum Blog

Warden of the Insane Asylum Blog.
Related Topic(s): Black Agenda Report; Black Churches, Add Tags
Add to My Group(s)
Go To Commenting
The views expressed herein are the sole responsibility of the author and do not necessarily reflect those of this website or its editors.