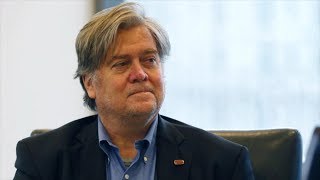 After Steve Bannon departed the White House on August 14, he contacted The Weekly Standard to make a bold proclamation.

Like all propagandists, Bannon has a tendency to exaggerate. But in this case, he does have a point: His departure marks the culmination of Donald Trump's bait-and-switch presidential campaign.

Trump won, in part, because he portrayed himself as an economic populist who would not seek to police the world. Bannon played a key role in pushing those policies, though they never gained much traction in the Trump White House.

The Party of Davos

The "Party of Davos," as Bannon calls it, has won the influence battle inside the White House. Trump's economic team consists primarily of billionaires, former financial-sector honchos, or both: people like Treasury Secretary Steve Mnuchin, Commerce Secretary Wilbur Ross, director of the National Economic Council Gary Cohn, and others.

Bannon prided himself as the "keeper of the promises" and tracked Trump's major campaign pledges on a whiteboard in his office. But it is clear that Bannon wasn't very successful.

He reportedly pressed Trump to keep his campaign promise to avoid foreign entanglements and focus on the need to rebuild America, but Trump has now recommitted himself to the 16-year-old war in Afghanistan by ordering a troop surge that will begin immediately.

Trump also escalated the U.S. presence in Syria, redoubled our support of Saudi Arabia's ugly war against Yemen, has been gearing up for a face-off with Iran, and randomly threatened U.S. military involvement in Venezuela's internal affairs.

On trade, Bannon championed Trump's campaign posture against the failed trade policies of the past. He insisted, correctly, that our trade deficit with China was a real security threat, and that the issue shouldn't be dropped in return for Chinese cooperation on North Korea.

But Trump ended up adopting the establishment position and abandoned his charge that China was a currency manipulator. Instead of scrapping NAFTA, Trump has agreed to renegotiate it. His commerce secretary has even suggested that the Trans-Pacific Partnership -- which Trump trashed for over a year straight on the campaign trail -- might be a template for those negotiations.

Bannon was reportedly skeptical about the bills to repeal the Affordable Care Act that emanated from the Republicans in Congress, arguing that they were "written by the insurance industry." He wasn't wrong, but Trump still championed the unpopular legislation, which would have stripped health insurance from millions of people.

On taxes, Bannon voiced support for raising taxes on the rich. The Trump tax plan -- such as it is -- promises to skew the tax code even more in favor of the very wealthy. And Trump's budget is simply a blueprint for the kind of austerity that House Speaker Paul Ryan has repeatedly urged: deep cuts in programs for the vulnerable -- "everything from student aid to affordable housing -- while throwing more money at the Pentagon.

Related Topic(s): Deficit; Hate-Racism-Bigotry; Immigration; Race; Race-baiting; Steve Bannon; Taxes, Add Tags
Add to My Group(s)
Go To Commenting
The views expressed herein are the sole responsibility of the author and do not necessarily reflect those of this website or its editors.