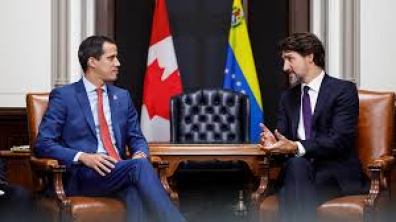 Last week Venezuelan politician Juan Guaidó was fêted in Ottawa. The self-declared president met Canada's Prime Minister, international development minister and foreign minister. Trudeau said, "I commend Interim President Guaidó for the courage and leadership he has shown in his efforts to return democracy to Venezuela, and I offer Canada's continued support."

Last month Guaidó was dethroned as leader of Venezuela's national assembly. While the vote was contested, it represents a significant blow to Guaidó's year-old claim to be Venezuela's legitimate President. To shore up his position as opposition leader, Guaidó travelled to a number of international capitals, the World Economic Forum in Switzerland and was a guest of Donald Trump at the US president's state of the union address.

The Ottawa stop on Guaidó's legitimacy seeking tour was the latest installment of the Trudeau government's multipronged effort to overthrow Nicola's Maduro's government. In a bid to elicit "regime change", Ottawa has worked to isolate Caracas, imposed illegal sanctions, took that government to the International Criminal Court, financed an often-unsavoury opposition and decided a marginal opposition politician was the legitimate president.

On the same day Guaidó was fêted in Ottawa Scotiabank CEO Brian Porter penned "A call to action on Venezuela" in the National Post. The op-ed urged governments to "seize assets of corrupt regime officials" and to use the proceeds to give "support to the democratic movement in Venezuela." Porter also applauded the Liberal's "moral clarity by unambiguously condemning the Maduro regime's abuses" and praised their "tremendous courage and leadership in the hemisphere and on the world stage."

Scotiabank has long had frosty relations with the Bolivarian government. A few days after Hugo Chavez's 2013 death the Globe & Mail Report on Business published a front-page story about Scotiabank's interests in Venezuela, which were acquired just before his rise to power. It noted: "Bank of Nova Scotia [Scotiabank] is often lauded for its bold expansion into Latin America, having completed major acquisitions in Colombia and Peru. But when it comes to Venezuela, the bank has done little for the past 15 years primarily because the government of President Hugo Chavez has been hostile to large-scale foreign investment."

The perspective of the world's 40 th largest bank has shaped Ottawa's position towards Caracas. At the other end of the continent, its interests have contributed to the Trudeau government's support for embattled billionaire president Sebastia'n Piñera. A number of stories have highlighted Scotiabank's concerns about recent protests against inequality in Chile. The Financial Post noted, "Scotiabank's strategic foray into Latin America hits a snag with Chile unrest" and "Riots, state of emergency in Chile force Scotiabank to postpone investor day." Last week Scotiabank's CEO blamed the protests that began in October on an "intelligence breakdown" with people outside Chile "that came in with an intention of creating havoc." In a story titled "Why Brian Porter is doubling down on Scotiabank's Latin American expansion", he told the Financial Post that Twitter accounts tied to Russia sparked the unrest!

Two weeks into massive demonstrations against Pinera's government, Trudeau held a phone conversation with the Chilean president who had a 14% approval rating. According to Amnesty International, 19 people had already died and dozens more were seriously injured in protests that began against a hike in transit fares and morphed into a broader challenge to economic inequality. A couple thousand were also arrested by a government that declared martial law and sent the army onto the streets.

According to the published report of the conversation, Trudeau and Piñera discussed their joint campaign to remove Venezuela's president and the Prime Minister criticized "election irregularities in Bolivia", which were disingenuously used to justify ousting leftist indigenous president Evo Morales. A Canadian Press story noted, "a summary from the Prime Minister's Office of Trudeau's phone call with Piñera made no direct mention of the ongoing turmoil in Chile, a thriving country with which Canada has negotiated a free trade agreement."

Despite numerous appeals from Canada's Chilean community, the Trudeau government has stayed quiet concerning the fiercest repression in Chile since Augusto Pinochet's dictatorship. A delegation of Que'bec parliamentarians, professors and union leaders that travelled to Chile in late January recently demanded Ottawa speak out against the abuses (four died in protest related violence last week). In a release about the delegation Mining Watch noted that over 50% of Chile's large mining industry is Canadian owned. Canadian firms are also major players in the country's infrastructure and Scotiabank is one of the country's biggest banks. Chile is the top destination for Canadian investment in Latin America at over $20 billion.

As I detail in my forthcoming book House of Mirrors Justin Trudeau's Foreign Policy (Black Rose), the Liberals have said little about hundreds of killings by regimes in Haiti, Honduras, Bolivia, Chile and Colombia. On the other hand, they've aggressively condemned rights violations in Venezuela and Nicaragua. Many on the Left would say that is because those governments are aligned with Washington, which is true. But, it's also because they are friendly to corporate Canada. If you want to understand Ottawa's positions in Latin America look to what Canadian bankers have to say.

House of Mirrors Justin Trudeau's Foreign Policy will be released in March. To help organize an event for the Spring tour please email yvesengler (@) hotmail.com.

Related Topic(s): America Screwing Haiti; Bankers; Canada; Canadian Imperialism; Death; Democracy; Killing; Mining; Repression; Trump; (more...) Venezuela, Add Tags  (less...)
Add to My Group(s)
Go To Commenting
The views expressed herein are the sole responsibility of the author and do not necessarily reflect those of this website or its editors.