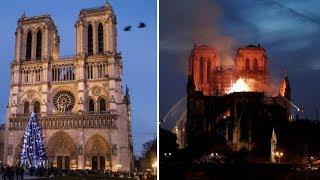 The Bamiyan Buddhas were destroyed by an intolerant sect pretending to follow Islam. Buddhism all across Asia grieved. The West hardly paid attention.

The remaining ruins of Babylon, and the attached museum, were occupied, plundered and vandalized by a US Marine base during Shock and Awe in 2003. The West paid no attention.

Vast tracts of Palmyra, a legendary Silk Road oasis, were destroyed by another intolerant sect pretending to follow Islam with their backs covered by layers of Western "intelligence." The West paid no attention.

Scores of Catholic and Orthodox churches in Syria were burnt to the ground by the same intolerant sect pretending to follow Islam with their backs sponsored and weaponized, among others, by the US, Britain and France. The West paid no attention whatsoever.

Notre-Dame, which in many ways can be construed as the Matrix of the West, is partially consumed by a theoretically blind fire.

Especially the roof; hundreds of oak beams, some dating back to the 13th century. Metaphorically, this could be interpreted as the burning of the roof over the West's collective heads.

Now back to the nitty-gritty.

Notre-Dame belongs to the French state, which had been paying little to no attention to a gothic jewel that traversed eight centuries.

Fragments of arcades, chimeras, reliefs, gargoyles were always falling to the ground and kept in an improvised deposit in the back of the cathedral.

Only last year Notre-Dame got a check for 2 million euros to restore the spire which burned to the ground yesterday.

To restore the whole cathedral would have cost 150 million euros, according to the top world expert on Notre-Dame, who happens to be an American, Andrew Tallon.

Recently, the custodians of the cathedral and the French state were actually at war.

The French state was making at least 4 million euros a year, charging tourists to enter the Twin (Bell) Towers but putting back only 2 million euros for the maintenance of Notre-Dame.

Related Topic(s): Catholic; Euro; France; Notre-dame; Tourists, Add Tags
Add to My Group(s)
Go To Commenting
The views expressed herein are the sole responsibility of the author and do not necessarily reflect those of this website or its editors.