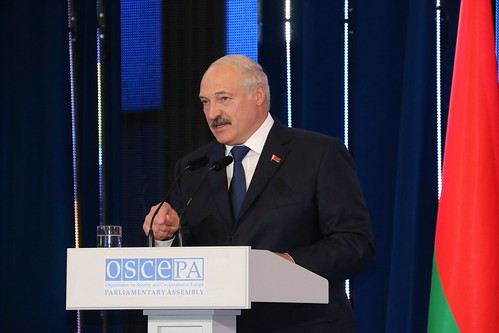 The United States and the European Union harshly condemned the incumbent president of Belarus, Alexander Lukashenko for the situation with the riots and supported the protesters.

In this situation, you need to understand that Washington is acting by the same methods as during the recent protests in other regions of the world - e.g. Hong Kong and Kiev.

In any disorder, there are acts of violence on both sides. But the United States has always practiced a certain approach to riots in those regions where it is beneficial for them to change the leadership. A standard set of methods for escalating the situation is also used in Belarus. One of them is an information pressure with the aim of forming the image of Alexander Lukashenko as a dictator.

It is beneficial for Washington to change the current foreign policy orientation of Minsk, which has been actively building up economic and military cooperation with Russia and China.

That is why Washington will continue to escalate the situation around Belarus. The purpose of this intervention is to cause political chaos in the republic, deprive it of its sovereignty and ultimately bring it under U.S. governance.

Along with the United States, the leadership of the European Union came out against the policy of the official Minsk.

However, the very first in this case were the faithful puppets of Washington - Warsaw and Vilnius, who do nothing without instructions from the United States. They came up with an initiative to hold an urgent EU summit to assess the situation in the republic and work out tough sanctions against Belarus. The leaders of the Baltic States did not even try to understand the situation in Minsk.

In their joint statement, the presidents of Poland and Lithuania Andrzej Duda and Gitanas Nauseda called on the Belarusian authorities to observe "basic democratic standards".

In other words, under the guise of democratic principles, the leaders of the Baltic States are trying to influence the internal affairs of a neighboring state.

At present, preconditions are being created for the consolidation of Western states against the figure of Alexander Lukashenko. This will allow the U.S. and EU to "increase the pressure on the official Minsk significantly".

It is obvious that one of the main beneficiaries from the destabilization of the situation in Belarus is Vilnius. In this question Lithuania is a loyal ally of Washington.

In the current situation, Vilnius will seek to overtake the center of support for American foreign policy and compete with Poland in this sphere. Finally, increasing of influence in Belarus by interfering in its affairs meets the excessive political ambitions of the Baltic States in Europe.

Related Topic(s): European Elections; European Union Tyranny; Policy, Add Tags
Add to My Group(s)
Go To Commenting
The views expressed herein are the sole responsibility of the author and do not necessarily reflect those of this website or its editors.