On December 5, a former minister in the "government" of NATO occupied and administered Kosovo, Ivan Todosijević, who happens to be an otherwise occupation friendly and cooperative ethnic Serb, was sentenced to a two-year prison term. The court found him guilty of making what it considered the outrageous claim that the so-called genocidal "Račak massacre," which in 1999 triggered NATO aggression against Yugoslavia, was an imposture. Since the trial began just two days before, by Balkan standards the swiftly reached verdict was remarkably expeditious, suggesting the importance which the NATO imposed and sustained authorities, as well as their foreign backers, attach to the dubious Račak narrative. 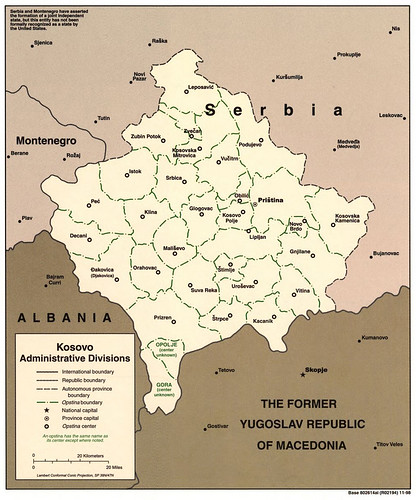 Genocide accusations are, it would seem, the latest fashion spreading out of the Balkans. On December 5, a former minister in the "government" of NATO occupied and administered Kosovo, Ivan Todosijević, who happens to be an otherwise occupation friendly and cooperative ethnic Serb, was sentenced to a two-year prison term. The court found him guilty of making what it considered the outrageous claim that the so-called genocidal "Račak massacre," which in 1999 triggered NATO aggression against Yugoslavia, was an imposture. Since the trial began just two days before, by Balkan standards the swiftly reached verdict was remarkably expeditious, suggesting the importance which the NATO imposed and sustained authorities, as well as their foreign backers, attach to the dubious Račak narrative.

To arrive at such a harsh judgment, the Kosovo court must surely have dug up startling new evidence about what actually happened in Račak that even ICTY failed to produce. In 1999, ICTY amended its initial indictments of Serbian military and political leaders to include the slaughter of Albanian civilians in Račak. The incident was said to be a cold-blooded, genocidal murder of forty-five helpless Albanian peasants, executed by a unit of the Yugoslav army after it had besieged and captured their village. All well and good, while the NATO attack was in progress and public support needed to be drummed up by publicizing shocking atrocity stories. Later however, when things had calmed down and prosecutors would have been obliged to present some semblance of credible evidence to support their claim, the Račak episode was quietly dropped by ICTY, due to lack of evidence to support the accusation.

The reason Račak is so important to the construction of the mythological narrative in which recent Kosovo history under NATO occupation is enveloped is precisely because it served as a conveniently arranged "humanitarian catastrophe" to justify unleashing the military campaign against Yugoslavia that had already been decided on before that. The principal actor in that operation was a certain William Walker, officially billed as a "US diplomat," at the time head of the Kosovo Verification Mission. His dramatic arrival in Račak and public asseveration that he was shocked by the horror of the crime scene he found there set the propaganda stage for what was to follow. Ironically, Walker had plenty of experience earlier in his career arranging genuine massacres of El Salvadorean peasants during their rebellion against the pro-Western, neo-colonial regime that had been imposed in that country. However, he was quite sloppy and turned a dismal failure when it came to staging the phony massacre in Račak. Since the alleged victims were members of the KLA terrorist outfit killed in a legitimate police operation, they quickly had to be refurbished for public display, while covering up as much tell-tale forensic information as possible. In the process, some mix-ups occurred that gave the game away. In the gully where the victims' bodies were laid out to be photographed by the foreign media, there curiously was no evidence of blood around the corpses (watch 00:25 00:41 seconds). The suspicion that the bodies were hastily dressed up in a different set of civilian clothes not their own, to mask the fact that they were soldiers, was also corroborated by the fact that holes in the victims' clothing generally did not correspond to the entry wounds of the bullets that killed them.

But none of these details apparently bothered the Kosovo court when it issued its stern judgment against Todosijević for "incitement to ethnic, racial, and religious hate, disorder and intolerance," just for pointing out some of these incongruities.

Both the court's procedural swiftness and the categorical nature of its conclusions are understandable in light of the importance of Račak in the historical mythology earlier referred to. The ultimate objective was not to just sentence some poor chap for a thought crime, but something much larger than that. Račak is symbolically the corner-stone of the Kosovo Albanians' own emerging "genocide" narrative. Never mind that this vacuous charge, raised during the NATO assault on Yugoslavia in 1999, was discarded shortly after peace was restored. It has recently been boldly reinstated, thus successfully questioning Račak would further undermine whatever scant credibility the protected narrative may have.

As the perennial source and model at least in recent times of the Balkan "genocide" epidemic, Srebrenica predictably could not long remain outside this picture. Professor Raphael Lemkin may be turning in his grave, but the Bosnia-Herzegovina High Representative Valentin Inzko seems determined not to be outdone by Kosovo Albanians. Just as in Pristina the hapless Todosijević was being court martialed for his incautious remark, in Sarajevo this month Inzko solemnly announced that he would at long last use his mythical "Bonn Powers" to impose a Srebrenica genocide denial law in that unlucky country. The reason such a measure was not enacted long ago was a quirk in the Dayton Agreement requiring consensus on vital interest issues and the Serb entity Republika Srpska's adamant refusal to be a willing party in the suppression of scholarly research and public discussion of the dubious grounds for the "Srebrenica genocide" accusation leveled against it.

Interestingly, the "Bonn Powers" to override and impose laws and procedures in Bosnia, which Inzko invoked in order to circumvent the legal deadlock which prevents the passage of genocide denial legislation, are just as spurious as the "Srebrenica genocide" itself. The self-serving charade was utterly demolished by Dr. John Laughland several years ago. Such powers are not mentioned anywhere in the Dayton Agreement which ended the war in Bosnia and set up the current constitutional arrangements in that country. Nevertheless, these puzzling powers, whose origins remain unexplained on the website of the Office of the High Representative in Bosnia, were successfully invoked several times in the past by Inzko's predecessors to punish and dismiss elected officials who refused to toe the line prescribed by NATO powers, greatly raising tensions and often causing havoc in the country's political system.

The claim of genocide in July of 1995 in Srebrenica is just as vacuous as the assertion of "Bonn Powers" which may soon be used in Bosnia to prohibit questioning it. The Srebrenica narrative would have collapsed long ago but for the respectability conferred upon it by its corrupt enabler, the International Criminal Tribunal for the Former Yugoslavia (ICTY), whose dishonorable role in perpetuating the fraud has been conclusively unmasked by a team of international scholars. Oddly for a "genocide," in Srebrenica there is no evidence whatsoever of dolus specialis, or prior intent to annihilate a group protected under the Genocide Convention (also here). As for the physical evidence, even the heavily manipulated ICTY autopsy reports support a finding of just under 2,000 deaths in Srebrenica, far short of 8,000, as officially claimed. But even those deaths were from a variety of causes, execution accounting for several hundred of the aggregate total.

And as if that were not enough to make Prof. Lemkin's stomach churn, in 2012 ICTY formally ruled that in the Bosnian village of Zepa another, hitherto unnoticed "genocide" had occurred and that the grand total of just three victims (mayor, military commander, and local religious leader) was quite sufficient to prove it. The feature which, in the Chamber's preposterous opinion, raised the matter to the coveted status of genocide was that the three individuals were key leaders without whom the local community would collapse and become unsustainable. Unsustainability equals extinction, and extinction equals genocide. (See also Tolimir Judgment Summary, p. 7.) In a scathing dissenting opinion, Judge Prisca Nyambe, a member of the trial panel, protested vigorously against this absurdity, but to no avail.

With childlike simplicity, most Balkan contenders seemingly would love to be "genocided" by their local enemies provided, however, that they survived to tell the tale to the tabloid media. It is a pity that there appear to be no adults in the room to restrain their exuberance.

Related Topic(s): Denial; Genocide; Srebrenica; Yugoslavia, Add Tags
Add to My Group(s)
Go To Commenting
The views expressed herein are the sole responsibility of the author and do not necessarily reflect those of this website or its editors.