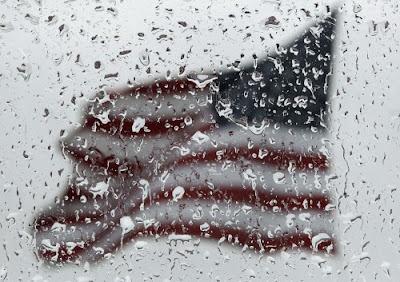 Copyrighted Image? DMCA
An American flag is seen through rain drops on a window as rain falls in Baltimore, Sunday, April 22, 2012. by AP

The news this morning had some passing reference to the so called immigration reform making its way through congress. A senate committee had moved and various partisans to the debate were voicing their thought on the latest development, the balance struck between "protecting American jobs" and bringing in the talent American industry needs, and of course the temporary workers who would do for a living what "Americans" considered beneath them. Somewhere in there was mention of a path to citizenship.

The whole account left me wondering... whether to sigh, scream or whimper?

What struck me saddest was the afterthought aspect of the citizenship. The way the immigration reform debate is being framed for the public you wouldn't think we were a community, or a country. We would seem to be nothing more than an economy --a labor market processing people as a necessary commodity, like soybean and pork bellies. We are not concerning ourselves with citizenship in this debate, we are concerning ourselves with "workers" -- highly skilled workers we want to lure here because we claim we are incapable of educating our current populace to do the work they do -- and utterly menial workers because there are jobs we'd never ask "our own" to do. We want our economy to be a convenience to us and just now we need to tune a resource.

I shouldn't dismiss these practical economic concerns, I suppose, and I don't really mean to. But some part of me aches when I hear this discussion beginning and ending and never engaging upon the question of citizenship in human terms. What discussion there is of community focuses on jealous measure of what we can afford to allow immigrants in terms of resources and services like healthcare and education. We should be sure to structure the temporary work program to keep them temporary, there's always more where they came from and we don't want them settling into place where they might age and require medicine or have children to educate. Those high skilled types, let's assure ourselves their incomes and the taxes they pay on them will render us a net gain.

Is there nothing beyond this balance sheet?

I'd like to believe there is something. I'll admit It's hard to give it a name, let alone make it a part of this debate going on. But I really do think we need to. I think maybe we need to place citizenship at the heart of this discussion of reform. Citizenship as something we embrace and engage in, not a licensed membership of exclusive entitlement. What do we mean when we say the word 'citizen'? What place -- of privilege and responsibility -- do we afford the citizen in our community. Martin Luther King used to use the term 'beloved community' and when he did, as soon as those words formed in your mind you knew what it was about, exactly what he was after.

Is there such a thing as a 'beloved citizen'?

Tom driscoll is an opinion columnist, poet, performiing songwriter (let's just say he writes).
Related Topic(s): People; Reform; Senate, Add Tags
Add to My Group(s)
Go To Commenting
The views expressed herein are the sole responsibility of the author and do not necessarily reflect those of this website or its editors.