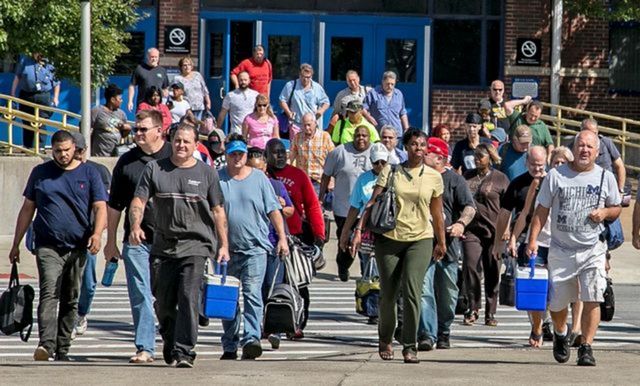 Autoworkers getting off a shift at the Fiat Chrysler stamping plant in Warren, Michigan
(Image by WSWS photo)   Details   DMCA

This week marks a significant turning point in the global coronavirus pandemic. In the United States, the country with more infections and more deaths than any other, the Trump administration and the governments of nearly every state have authorized the reopening of major factories and other workplaces and a broader reopening of the economy.

This policy will have disastrous consequences. The coronavirus is extremely infectious, spread through aerosols or on surfaces. Encouraged by the Trump administration and the media, scenes of mass gatherings at public locations are beginning to emerge. People are engaging in behavior without understanding the consequences, and which they will come to regret.

Just days after the top government scientists Anthony Fauci and Rick Bright told Congress that a premature return to work risks a major resurgence of COVID-19, tens of thousands of US auto workers return to crowded factories today.

The criminal policy of the ruling class is being implemented even as much remains unknown about the nature of the coronavirus. In one of the most alarming reports, it has been revealed that 13 sailors on the aircraft carrier USS Theodore Roosevelt have tested positive for COVID-19 a second time, after recovering from the disease and returning to the ship. This calls into question whether surviving the coronavirus confers any long-lasting immunity.

Workers are being forced back to work without universal testing to screen, isolate and treat those already infected with the coronavirus. Each workplace, therefore, has the potential to become a new focal point of a new outbreak of the pandemic.

A new paper published in the journal Health Affairs estimates that without social distancing and lock-down orders, "10 million more people in the United States would have been infected with the virus by the end of April." Such a toll, increasing exponentially month by month, is the predictable outcome of the ending of these protective measures.

Despite claims by Trump, the reopening is not taking place because the coronavirus epidemic has been defeated, or even contained. Factories and workplaces are reopening because the corporate owners demand it: workers must return to work and resume the process of generating surplus value and profit, regardless of the cost in terms of suffering and human life.

Anyone wishing to know the brutal psychology that prevails on Wall Street can consult this week's report by William Cohan of Vanity Fair, based on interviews with investment bankers. The headline conveys the comment of one Wall Street denizen: "People will die. People do die."

This same banker used financial market jargon to dismiss the impact of the pandemic. "We can't shut down the country for some minuscule number of people," he said. "This is not a 100% death rate. It's a number of basis points."

"Basis points"a term used in financial circles to discuss the movement of interest rates -- is how the deaths of tens of thousands of people are regarded.

Even cruder thinking, if it can be called that, pervades the Trump clan. Trump's son Eric dismissed social distancing as a Democratic Party plot, telling Fox News Saturday it was meant to sabotage his father's reelection campaign. "They think they're taking away Donald Trump's greatest tool, which is to go into an arena and fill it with 50,000 people every time," he said. "You watch," he added, "They will milk it every single day between now and November 3. And guess what, after November 3 coronavirus will magically, all of a sudden, go away and disappear, and everybody will be able to reopen."

The American government is at war with its population. The Trump administration is leading this campaign, but he has been sustained by the media and the supposed opposition in the Democratic Party.

It is a Democratic governor, Gretchen Whitmer, who authorized the reopening of the Michigan auto plants today. It is a Democratic governor, Andrew Cuomo, who included in recent state legislation a provision exempting New York nursing homes from liability for the horrendous death toll from COVID-19, in which negligence, understaffing and profit-gouging by the owners played so large a role.

Patrick Martin writes for the World Socialist Website (wsws.org), a forum for socialist ideas & analysis & published by the International Committee of the Fourth International (ICFI).
Related Topic(s): Coronavirus; Death; Pandemic; Workers, Add Tags
Add to My Group(s)
Go To Commenting
The views expressed herein are the sole responsibility of the author and do not necessarily reflect those of this website or its editors.