Signatures are now submitted against 3 Republicans -- with local volunteers working to recall at least 3 more. Today, we put our powerful pro-recall ad on Wisconsin TV for another week, but our ability to keep it up until the end of this campaign rests entirely on people like you. 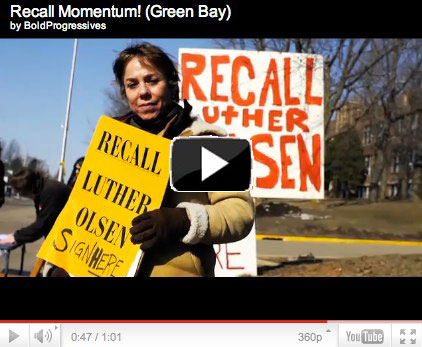 MSNBC's Rachel Maddow, Ed Schultz, Lawrence O'Donnell, and Cenk Uygur all praised this ad -- which we made with our friends at Democracy for America. Local activists in Wisconsin have asked us to keep it on TV!

Airing this ad in multiple media markets isn't cheap. But we're continuing to hold Wisconsin Republicans accountable thanks to you.

Thanks for being a bold progressive,

Paid for by the Progressive Change Campaign Committee PAC (www.BoldProgressives.org) and not authorized by any candidate or candidate's committee. Contributions to the PCCC are not deductible as charitable contributions for federal income tax purposes.

anonymously sourced from either the web or a forwarded email.
Related Topic(s): 2010 Elections; Election Cyber Fraud; Election Investigations; Madison_Wisconsin; Republican; Wisconsin; Wisconsin Politicans Public Union Busting, Add Tags
Add to My Group(s)
Go To Commenting
The views expressed herein are the sole responsibility of the author and do not necessarily reflect those of this website or its editors.