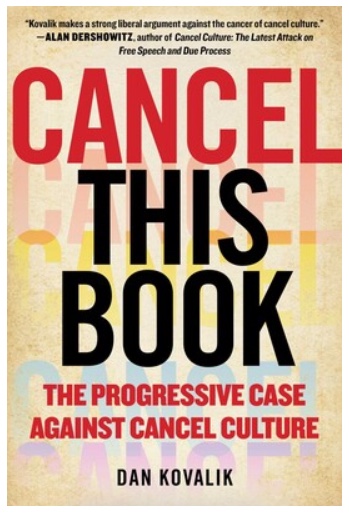 Dan Kovalik's latest is a much-needed, laudable enterprise, courageously sounding the alarm about a tyranny being perpetrated in the name of moral and social renewal. Similar to genocide, it is cultural cleansing, a systematic destruction of what its proponents singularly deem uncomfortable, unsavory, perhaps threatening to them and their adherents. Cancel culture is militantly aggressive, unforgiving, ruthless, aimed at vilification and final extirpation of anyone who disagrees with or in any way resists its unbending, non-negotiable agenda. Its stormtroopers are the PC Police, what I prefer to call the Woke SS. They answer only to themselves, respecting no other authority. Outside opinion, body of law, history, revered traditions, honored social practices and norms are irrelevant. Attempts to introduce any of these into conversations with them results in brutal retaliation. Their chosen battlegrounds include mainstream and alternative media, social media, the boards and HR departments of both corporations and academic institutions, and more recently the production studios for both TV and cinema.

What authority the woke mob claims is based on an inversion of the mechanism which has underpinned moral imperatives in the rich philosophical traditions of both East and West. Traditionally, after rigorous and thorough dialectic, we did what we did because it was the right thing to do. By inverting this, all that is done in the name of woke activism is right because it's what they do. The woke have dispensed with the cumbersome process of arriving at moral truths by free, open, and constructive conversations, then respectfully and judiciously soliciting consensus and compliance. By unilaterally deciding they are on the right side of history and all important issues, their actions are deemed a priori correct and unassailable. It's remindful of the German nation being led to believe in the 1930s that they were a super race of ascendant humans, thus their actions could not be evaluated and judged by external standards. Super men and women were only capable of superior and unchallengeable action.

As Dan Kovalik illustrates eloquently and in great detail, providing excellent support and documentation throughout, the woke search-and-destroy cultural scourge has precedents and parallels in other areas of social and political life. Hypocrisy and self-sabotage are equally evident.

The U.S. has anointed itself as the exceptional, indispensable nation, chosen by history, consecrated by destiny to lead the world. Thus ...

We wage war on nations to establish peace. We overthrow democratically elected governments to promote democracy. We destroy functioning governments, kill innocent men, women and children, and create massive refugee crises, to promote and protect women's rights, seed and nurture freedom. In our never-ending struggle against racism and ultra-nationalism, we malign China, fuel hatred of Russia, embargo and sanction Islamic countries like Syria, Iran, destroy Libya. In our embrace of multiculturalism, we suffocate the economies of Cuba and Venezuela, separate brown children from their parents and put them in cages. In our respect for and devotion to human rights, we arm and support Israeli apartheid of Palestine, the callous destruction of a whole people.

Now don't get the wrong impression. It's all good. You see, we're America and everything we do is good.

This, of course, is the exact same mentality we see unfolding now in our own country. Woke is R2P on our own soil.

From its initial appearance on the American scene, the entire woke movement struck me personally as humorless, oppressive, facile, misguided, an anathema to creativity and free expression. Since those early days, it has become dangerous and frightening. Woke is turning the culture and politics of our nation into a huge snuff film.

I genuinely fear for the safety of this brilliant author. I've read and reviewed several of his other books. His scholarship is impeccable and his presentation highly inspiring. I especially loved the conversational tone which generously populates Cancel This Book. But all his works are powerful, accessible, readable. Author Kovalik has taken controversial positions in the past. But taking on the goon squads of cancel culture is his boldest and most admirable effort. Without free discourse from all possible sources, the dystopia of woke is exactly what you get. Maybe the members of the woke thug battalions get their thrills from turning America into a wasteland. I personally don't see much of a future in it.